Computing a boolean function with a small formula

I need to prove that in this case I can express $f(x)$ as a boolean formula of size $O(n\cdot k).$

What would be the idea about this?

Since for every input $x$ we have an $s \in S$ one could encode the specific $s$ for every one of the $2^n$ possible inputs but this would give a too large formula. 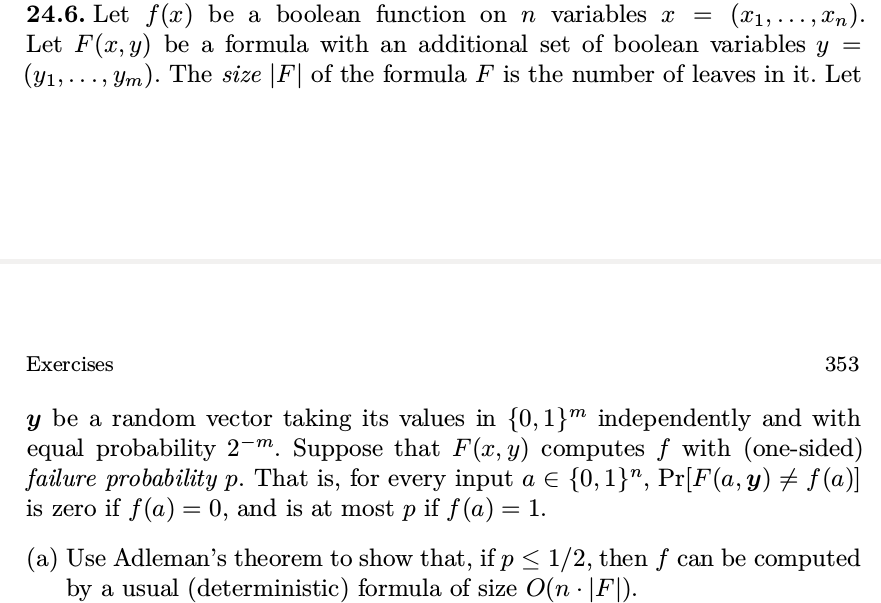 as it appears in the book "Extremal combinatorics with applications to computer science 2ed."

Something has gone wrong in the way you applied Adleman's theorem: it has led you to try to prove something that isn't actually true.

There's a crucial difference between "there exists at least one $s$ for which (blah) is true" vs "(blah) is true for a large fraction of $s$".

I don't know how you got to your claim or what went wrong in your translation from the book's exercise to your claim, but I suspect you didn't apply Adleman's theorem quite right, or the way you applied it didn't give you strong enough conclusions/assumptions about the properties that $F$ has.

Not the answer you're looking for? Browse other questions tagged circuits boolean-algebra or ask your own question.

4
Converting Boolean circuit to Boolean formula in parallel
6
What is a simple way of explaining what a linear boolean function means in boolean algebra and relating it to the standard definition of linearity?
1
Why is the inner product of -1,+1 binary variables at most $n-2$ and not at most $n-1$?
6
Small world theorem for set constraints
3
Is every X3SAT instance with no cycles satisfiable?
3
Polynomial size Boolean circuit for counting number of bits
1
Functions with small support have small circuits