How can a quadratic algorithm be faster than a linearithmic one?

I have to solve the following problem:

Al and Bob are arguing about their algorithms. Al claims his $O(n\log n)$ time method is always faster than Bob’s $O(n^2)$ time method. To settle the issue, they perform a set of experiments. To Al’s dismay, they find that if $n<100$, the $O(n^2)$ time algorithm runs faster, and only when $n \geq 100$ is the $O(n\log n)$ time one better. Explain how this is possible.

I do not find how to relate this facts in order to make a conclusion although I suspect that constants $C$ and $k$ could play an important role in such a conclusion.

I will very much appreciate any clue so I can get a better idea about how to formulate an answer.

You could say that functions such as $f'(n)$ are artificial and never really occur in practice. This is not quite true (you can hard-code some auxiliary information for small $n$, for example), but even if you consider "natural" functions, asymptotic notation doesn't help you to determine anything other than asymptotics: consider for example $n^2$ against $10^{100} n\log n$ (such examples definitely happen in practice, for example in fast matrix multiplication).

Remember, that all asymptotic analysis tells us is how the running time varies with the size of the input for a particular algorithm. It doesn't tell us how many seconds it will take for an implementation of the algorithm to complete with a given input size. But we do know that if an O(n2)) algorithm takes X seconds to process a set of items, it will take approximately 100 times as long to process 10 times as many items.

Asymptotic notation eliminates constant factors because they're not really relevant to how the running time grows with the size of input. When you're talking about using an O(n2) algorithm on 1,000,000 items, it's unlikely that your constant factor is going to make much difference; the n^2 term is going to dwarf it.

Using one of the techniques I described above, you determine the constants for each of the algorithms. Let's call them Ci and Cq. Given that, we can estimate that insertion sort will be faster than Quick sort when (Ci * n2) < (Cq*(n log n)).

It should be obvious from looking at the two algorithms that Ci < Cq. The insertion sort is incredibly simple. The algorithm is nothing but comparison and swap, with a little loop overhead thrown in.

Consider sorting a five element array. Insertion sort will do, at worst:

So the partition method will be called four times. Each partition step requires a minimum of two swaps in addition to the comparison and swapping of elements, and other overhead. When you add it all up, you see that Quicksort does more work per iteration. When the number of iterations is small, Insertion sort does less total work even though it does more iterations.

the question and answers have a lot of notation. how about a picture, "worth a lot of words" and some zen-like visual/ geometric intuition? this is a simple graph of $x \log(x)$ (red) vs $x^2/15$ (green). rest of explanation (of the graph vs big O notation, etc) left as exercise to reader (eg also solve for exact region where one is supposedly "faster" than another etc, and reformulate the functions slightly so that it matches the constants $C,k$ in the question, etc). 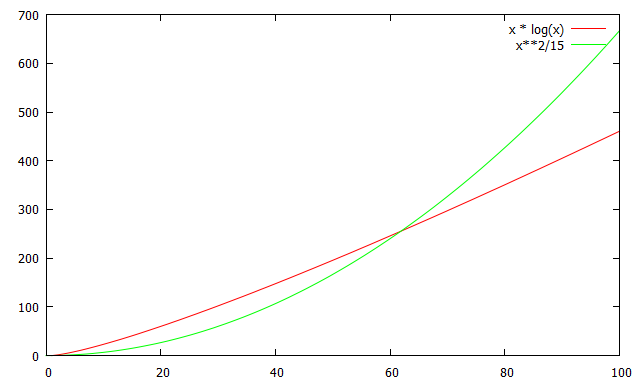 BTW it's worth to say that if $k < e\ c$, then there is no intersection point between those two curve types (no solution) , thus in this case small values of n where $O(n^2)$ wins - doesn't exist

So in general - region of n where $O(n^2)$ wins, depends on constants $c,k$. And these are directly related to operations amount/cost in loops of both type of algorithms. Bigger values of c,k indicates that some loop operations costs more for a CPU. Thus theoretically fast algorithm can be amortized by heavy operations for CPU.

Not the answer you're looking for? Browse other questions tagged algorithms landau-notation efficiency or ask your own question.

5
Explaining why FFT is faster than DFT for the general public?
2
Complexity of an algorithm for bounding a region in 2D
34
Why is selection sort faster than bubble sort?
0
Worst-case time algorithm?...which one is faster?
26
When is the AKS primality test actually faster than other tests?
18
Can a Big-Oh time complexity contain more than one variable?
3
Best sort method for median: median heap or insertion sort on a vector
193
How can a language whose compiler is written in C ever be faster than C?
5
Why does the square root of n! grow exponentially faster than exponential functions?