How does Knuth measure the running time of this program?

I'm reading "Structured Programming with go to Statements" by Knuth, and in it, he gives the following algorithm and a run-time cost analysis of some hypothetically generated code, letting $n$ stand for the number of times around the loop, and where instruction fetch and memory accesses cost one unit, so for example $r2\gets m$ costs two units because it's an instruction fetch, and you need to fetch $m$ from memory. 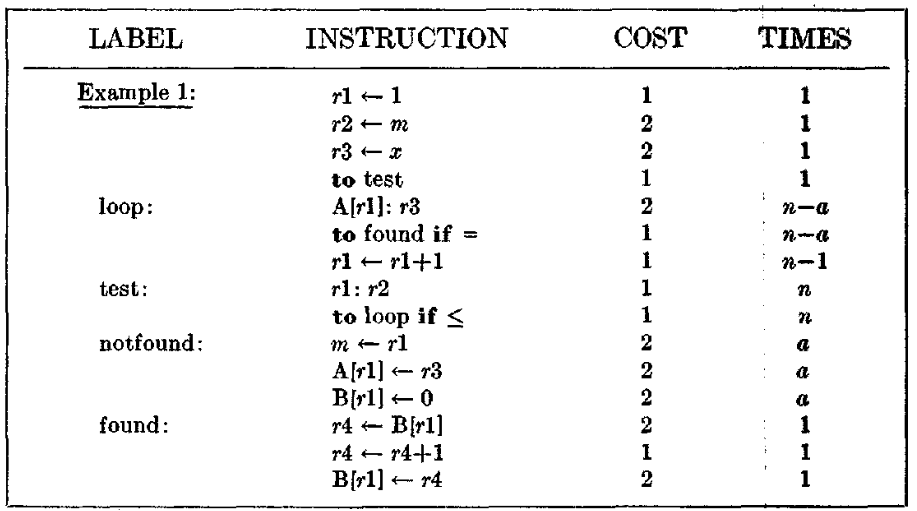 My question is what does $a$ mean in these equations? How can the instructions associated with the not found label execute more than once, rather than $a$ times? Given the nondeterminism of whether you'll execute the not found instructions depending on the contents of $A$, I can expect there's a special way of dealing with it in the analysis, but I don't follow him in the paper where he claims the total running time based on this analysis is $6n+10$. He says (+ 3 if not found), implying that $a$ is $1/2$, but using that assumption, the total sum comes out to $6n+8.5$, (+3 if not found). Is this some common notation I'm missing? No where in the paper is $a$ defined.

Not the answer you're looking for? Browse other questions tagged algorithm-analysis runtime-analysis or ask your own question.

178
Is there a system behind the magic of algorithm analysis?

1
Amortized analysis for doubling resizing array is ~3n
9
What is the running time of this recursive algorithm?
1
How fast is this Division Algorithm
1
Running time of this Program
3
Dijkstra's Notes on Structured Programming - concerning the program to compute first 1000 prime numbers
0
Algorithm Running Time