Where is Program Counter (PC) stored?

Also how big are these counters?

What happens if that memory has been filled up?

Inside a modern high-end CPU, the "program counter" is probably not stored in a single place. Superscalar out-of-order execution requires more than one instruction to be executing at a single time, some of them executing speculatively.

To understand what's going on, you need to consider what the program counter is used for. I'm going to use the Intel Core 2 microarchitecture as an example, mostly because it's the only decent-but-uncluttered diagram that I could find. Most modern high-end CPUs are broadly similar, in that they have a Tomasulo-like pipeline with register renaming. A RISC (e.g. MIPS or ARM) might have fewer decode stages. Also, not all CPUs implement a retirement register file; there are other methods which do the same job.

Nonetheless, let's go with this for the moment. 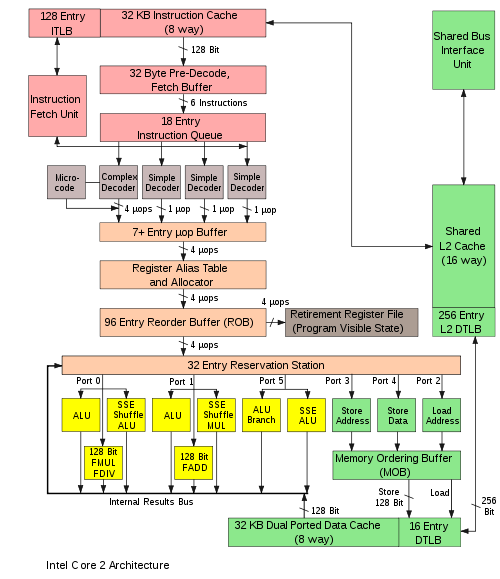 Instructions are (broadly speaking) streamed from the top to the bottom of the diagram. They start in the cache (and of course may have to be fetched into the cache), go through decoding and being stored in different buffers, until they end up in the reservation station. Here it waits until it is ready to execute.

When everything that an instruction needs becomes available, it goes to an execution unit. In the diagram, the yellow parts are the "normal" execution units (integer, floating point). There are also execution units for memory operations, but we'll ignore those for the purpose of this discussion.

When an instruction has finished execution, the results are posted on the results bus (called the "common data bus" in Tomasulo's original paper). These results may wake up instructions which depend on those results, and the cycle continues.

Now, think for a moment about what the program counter is used for.

Conditional branches are similar, except that the instruction fetch unit needs to decide whether to guess that the branch was taken or not taken to keep instructions flowing.

So the IFU has an idea about what the "program counter" is, but it is granular, working on a cache line at a time.

Now let's think about execution. The CPU would like to execute instructions out of order if it can, however things can happen which complicate that. The most obvious problem is if the IFU incorrectly predicted a conditional branch. However, instructions can also raise exceptions, and also the CPU might need to respond to an external interrupt.

To achieve this, the CPU needs to be able to recreate the CPU state as if it was executing instructions sequentially at the time that the control flow was interrupted. This is the job of the reorder buffer.

The reorder buffer is conceptually a queue of instructions, ordered by the "logical order" (i.e. the order that they would be executed if this was a scalar in-order processor). An instruction enters the queue as it travels down the fetch-and-decode path. Once it is in the ROB, it can execute out-of-order.

The "result" of many instructions is to write a value into a register. If that value is used by a subsequent instruction which is awaiting execution (i.e. it's in the reservation station), then this is handled by the internal results bus. Either way, the result is also stored in the instruction's entry in the ROB. This arrow is not shown on the diagram, but it happens.

When an instruction retires, any register write that it does is stored into the retirement register file. Because instructions are retired in-order, this register file actually stores the state of the machine registers exactly as they would be if the instructions were executed in-order. This is why it's also called the "program visible state". This is the view of the registers that the program "sees", what is saved and restored on a context switch, and so on.

As an aside, the ROB is also how faults and exceptions are handled. If a fault occurs, then the ROB for the faulting instruction is updated with information about the fault, and every instruction after it in the ROB is removed, along with a flush of the fetch-and-decode parts of the pipeline. This ensures that instructions after the fault don't "happen" even if they have been executed already: the results of those instructions never make it to the program-visible state. Speculative execution is handled in a similar way.

A final place where the program counter may be stored is as a general-purpose register. Exactly what this means is a bit complicated to explain if you don't know how register renaming works, but some instructions might need the value of the program counter (e.g. it might be used for memory addressing in position-independent code), in which case transient copies may be stored in reservation station entries of instructions which use it.

So what I hope you can see here is that the real answer is "it's complicated". The program counter is different from other registers in a modern CPU, and there is no one place where it's really "stored", because more than one instruction is "happening" at any given point in time.

Program Counter is a register in the CPU hardware.

Effectively it's a digital counter so consists of binary latches where each latch represents a binary bit. Number of latches,ie the size of the PC depends on the processor architecture.

2
Is the "data path cycle" the same thing of the "fetch-decode-execute cycle"?
2
Can a Von Neumann CPU be pipelined?
16
How is a program executed at the CPU level?
5
Why does the program counter increment before an instruction is completed?
1
How does MIPS ( or any other multi-byte word arch ) fetch a word?
3
Registers of Control Unit and Arithmetic Logic Unit
1
In pipelining (at least, in MIPS), why is the incremented program counter address saved in the IF/ID pipeline register?
0
Program counter in a CPU
2
How are programs split up into pages in Memory Paging?