I am currently trying to implement the divide and conquer method of computing the 3D convex hull given by Preparata, outlined here:

The convex hull CH(A, B) of A and B may be obtained by the following operations (see Figure 4 for an intuitive illustration):

(1) Construction of a "cylindrical" triangulation $\Im$, which is tangent to A and B along two circuits $E_{A}$ and $E_{B}$, respectively.

(2) Removal both from A and from B of the respective portions which have been "obscured" by $\Im$.

Here is where the paper describes the construction of the "cylindrical" triangulation. 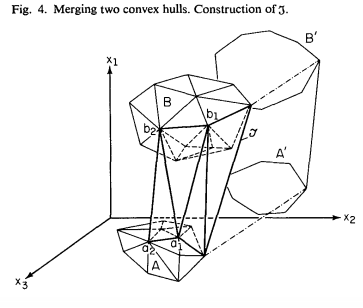 My question is how do you determine the vertices of the new triangle after you have chosen the winner?

Browse other questions tagged algorithms or ask your own question.

0
create divide and conquer algorithm
4
Computing the right tangent of two convex hulls
0
Proof of correctness for a triangulation-algorithm
3
An efficient algorithm to decide if a triangulation is 3-colourable
6
How to find the supremum over all the “good” (interior) polytopes for a given set of 3D points?