Register images containing objects with varying distance to the cameras

I'm learning about using image registration to align two images, e.g., two photographs of the same scene taken from a slightly different location. What factors influence how well we can align the images? Does the distance to the objects in the image influence its effectiveness of alignment, and if so how? What about the amount of variation in the distances to the objects in the images: how does that influence the effectiveness of the alignment?

Background: I came across the notion of "global image registration" when reading the paper

At first, I assumed that the authors mean objects across different frames (then needed to have a similar distance to the camera across the frames), where the previously calculated registration is supposed to work for each frame.

Then I thought that they maybe mean the registration of a single image pair and that objects of interest must be in similar distance to the camera.

To check this, I registered two pairs of image. The first pair has a lot of depth, the second pair does not, i.e., the first pair contains objects of varying distances to the cameras. It can be seen that the latter is much better registered than the former. This suggests that my second statement is correct: an image registration based on one transformation function is not able to register an image well if there is a lot of variation in the distances to the objects in the image. Is this correct? 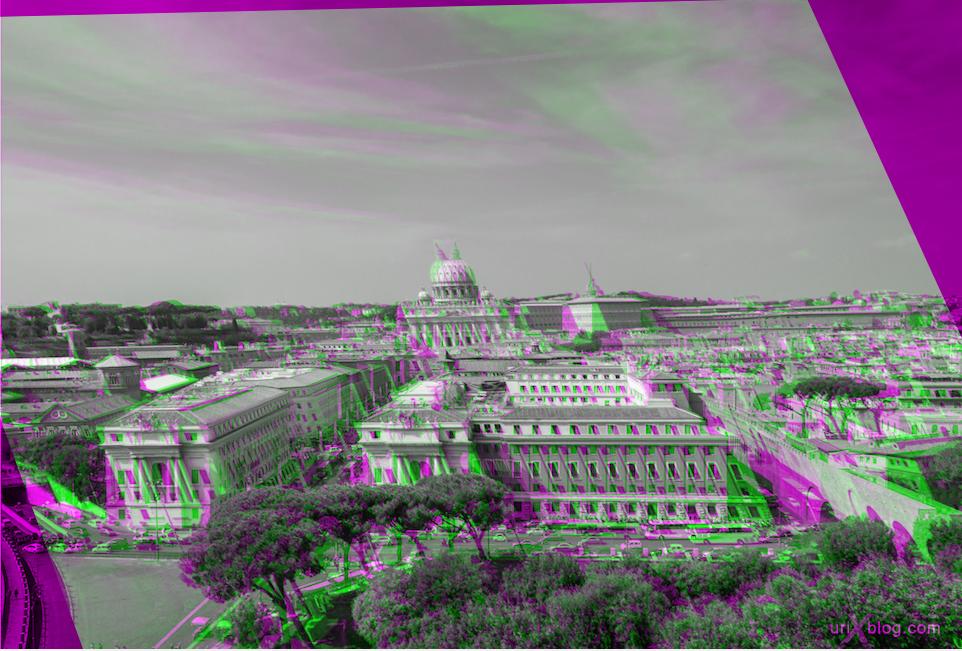 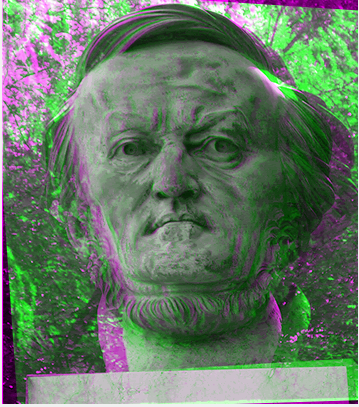 Yes, if there is a lot of variability in the distance to the objects in the scene, then global registration will work poorly.

Let me back and give some background on how global image registration works. It tries to align the two images. In its simplest form, the only transformation that is allowed is translation: it tries to find a way to shift all the points in the left image in a constant direction, to make it match the right image as much as possible. In other words, it looks for a translation $T$ such that $T(I_1)$ matches $I_2$ as much as possible, where $I_1,I_2$ are the two images.

With this background, you can see why global image registration won't work well for scenes with objects at multiple distances, when you have two pictures taken from a different point. Imagine taking one picture, then moving left one mile, then taking another picture. Objects that are far away won't shift their location in the image very much, but images that are close will shift to the right a lot in the second image. Global image registration tries to find a constant translation that makes everything match up in the two images, but there is no single translation that will work well. To make the distant objects match up, you'd need a small translation; to make the nearby objects match up, you'd need a large translation; and there is no way to reconcile these differences.

This is the major problem you're seeing. There are other problems as well, due to the fact that the image is only a 2D representation of a 3D scene. For instance, if you take two photographs from two different positions, then not only will the location of the objects in the images shift, but also you'll be viewing them from two different angles. Global image registration can't un-do that, because it can't see around corners. Look at the two images of the statue. Imagine that the statue had a little bit of bird dropping on the left side of the person's nose (our left; the person's right). Then the bird dropping might be visible from the second photograph, which is taken straight-on, but might not be visible from the first photograph, which is taken from an angle. Alignment can't fix this, as it can't magically make up for things that aren't visible in the photograph.

Not the answer you're looking for? Browse other questions tagged image-processing computer-vision or ask your own question.

1
Register images from a camera which has undergone pure forward translation
2
Extracting intersecting objects of the same colour from an image
3
Image registration algorithms for images with varying distances
2
How is RANSAC used to estimate a homography given the descriptors of both images computed with SIFT?
5
Hausdorff distance between two binary images according to distance maps
2
Image segmentation of a high resolution 2D binary image into clusters, threads and points