Can normal physics laws be simulated in Digital physics? [closed]

Ask Question
Asked 5 years, 9 months ago
Active 5 years ago
Viewed 741 times
0
$\begingroup$
Closed. This question needs to be more focused. It is not currently accepting answers.

Physics is defined as the study of an object {matter or energy} with its interaction with other objects:

Physics is the study of matter, energy, and the interaction between them.

On the other hand, Digital physics is based on computations and information.

Digital physics is a collection of theoretical perspectives based on the premise that the universe is, at heart, describable by information, and is therefore computable.

If we have a universal computer {a universal turing machine} and a program that can compute the evolution of the universe (Digital Physics) running on it, can this specific program simulate our normal physics laws like the classical mechanics laws or quantum mechanics laws ?

1- Can we simulate a universe with its fundemental laws {i.e physics} and change these laws by a universal computer accordingly ?

2- How a simulation of a universe (if any) with fundemental laws {like physics} would help to further understanding in physics ?

3- Is there any form of universal turing machine to apply these simulation ?

You can program a computer to take some initial state of the universe and apply all the laws of physics to it to get a new state of the universe. This comes with a couple of caveats. First, you need to somehow discretize the time steps you compute. Differential equations operate under continuous time, but a numerical simulations does discrete steps. It's reasonably well understood how to do that without losing too much precision. This brings us to a second problem, precision. Physics is generally formulated using real (or complex) variables, but computers only deal with finite precision. Usually this is ok, because in reality we can also only distinguish things with finite precision. Lastly, our laws of physics are not yet complete. There are a number of phenomena where we don't really know what's supposed to happen, so the simulation won't represent the real universe perfectly, even if we start with a proper starting state (which we can also only guess) and use sufficient precision and sufficiently small time steps.

Note that it is completely impractical to simulate all laws of physics as we know them on real computers. Even simulating single molecules with all relevant laws is very hard even for supercomputers.

Nevertheless, physicists simulate things all the time, sometimes using bold approximations to cut down the required computation. It's really important in physics to do simulations. Wikipedia has on overview article on Computational Physics and Richard Feynman has written a classic paper called Simulating Physics with Computers.

It is of course also possible to tweak the laws of Physics a bit and do your simulation. You can change the equations, or the constants and see what happens to your simulated system. You can for example find that changing some constants just a little produces an inhospitable universe.

Now I don't think it's possible to change fundamental mathematical truths in your simulated universe, because Physics makes no prediction about mathematics. You can't change the laws of Physics such that 1+1 != 2.

It is currently believed that physics requires real numbers. Digital computers cannot work with real numbers. We spend a great deal of time in simulations trying to cope with the difference between real numbers and IEE-754 floating point representations of those numbers. We also try to avoid operating in the known environments where those differences are resolvable (which occurs in many chaotic systems). We also abuse statistics, and seek to argue that a sampling of universes can describe a statistical variable in the real world.

One option would be to do symbolic manipulation, if you could identify a set of symbols which fully identified state of the universe. However, the ability to model our universe that way is highly questionable, due to self-referential issues. Read about Godel's incompleteness theorem if you're interested in questions about predicting the state of our universe, not just an arbitrarily specified universe.

This question is too broad to be useful I think. The general answer is, of course, no because all computers we have operate in a discrete manner while laws of physics seem to be pretty damn continuous (even with quantum mechanics in the way). So you'll always have rounding errors, steps which have nothing in-between and insufficiently random behavior.

I think the best example is just simple bouncing balls problem. If you have ever implemented it you know that, as the program goes on, balls get stuck in each other, as in this image I've drawn for you: 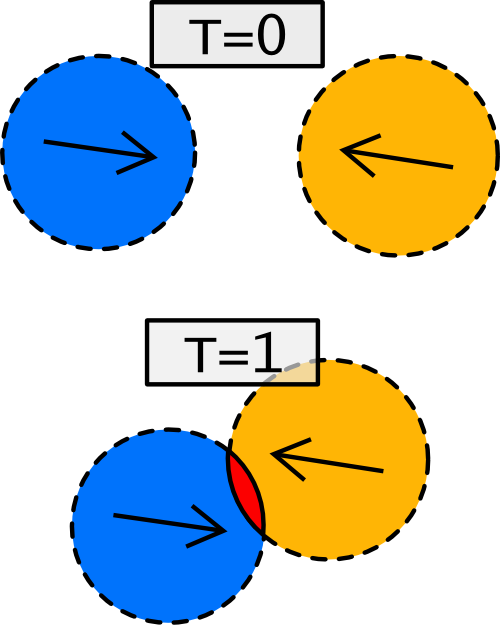 Not the answer you're looking for? Browse other questions tagged computability turing-machines physics or ask your own question.

8
Are there things an analog computer can do that digital computing cannot do?
4
Is computation independent of hardware?
3
Can the higher-order oracle Turing machines simulate the lower-order machines so that the current oracle does not contradict the simulated oracle?
2
Can hypercomputation compute all kinds of incomputable numbers/functions/problems…etc?
0
Would Schmidhuber's theories of everything be capable of performing hypercomputation?
0
Prove completeness of a language with Turing Machine
16
Can one build a “mechanical” universal Turing machine?
1
Church-Turing Thesis - the mechanical model - the turing machine- its limits and its equivalence with a modern digital computer
2
How are two registers are enough to simulate a Turing machine?