But I was wondering if there's some general theory about these functions and, specifically, if there's a general way to build such functions.

There is a general cryptographic theory of provably secure hash functions. There are several inequivalent notions of security. Hash functions are a cryptographic primitive, and the goal of cryptography is to explore relations between different primitives – can one primitive be constructed using the other.

If you want a hash function with a particular integer range $[a,b]$ (as indicated in the comments), there are two basic options:

A hash function is any function that can be used to map data of arbitrary size to data of fixed size.

So basically a hash function is just like a mathematical function that transforms one set of values to another.

They are widely used in Password Salting, Data Integrity a a LOT of another applications etc.

The reason they are used in many many many applications are because they are essentially One-Way. Once they are made, it is difficult to reverse them.

On theoretical foundation, which is the foundation of such One Way Hash Functions (And probably what you're looking for) is the Avalanche Effect.

The effect ensures that, H(x) is very very different than H(x+1) 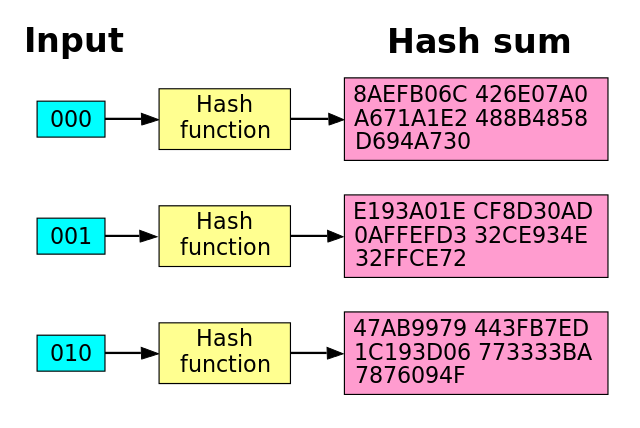 The more this effect, the harder it is is reverse a hash.

For searching, you want a hash function that distributes the input data for a particular case with no (or little) collisions. If you know the data beforehand, you can construct a perfect hash function for that data. Useful if you are searching for a fixed set of keys, mostly.

If you don't know the data beforehand, you are restricted to work on some distribution of the input data and try to find a hash function that flattens that distribution to something uniform (since frequent hash values will tend to give collisions). Fun really starts the moment your potential input data is a very large set has a complex distribution (think English words as used in everyday text as a sample of the set of all possible strings), of which you select a small sample for each particular run (say the words used in this question and its answers, which has a particular extra twist as the word usage here isn't exactly everyday). Plus you want a simple function, that is fast to compute on the available hardware (a slow function negates the advantages of hashing).

Add the problem of algorithmic attacks, i.e., an attacker who knows the hash function shouldn't be able to feed it a large number of keys that collide, thus fouling up the hash search.

Since practical applications must be empirically driven, this paper uses Genetic Programming to ensure a more uniform distribution of hash vales: Repairing and Optimizing Hadoop

Not the answer you're looking for? Browse other questions tagged algorithms data-structures hash or ask your own question.

9
Fast hashing: combination of different techniques to identify changes in a file?
6
Is the following intuition valid for understanding $k$-wise independent hash functions?
5
Two-way Hash Functions
0
Using DCEL to represent “simple geometric objects”
4
Is there any data structure that can't be represented or described inside a computer?
32
Will hardware/implementation affect the time/space complexity of algorithms?
5
How do you find a hash function that respects a custom equality function?