The structure of the subset sum problem

Now it seems that though the sums are not in order and thus not searchable efficiently there is some structure as indicated by the picture below. In the image there are the cases i = 1..7. The "boxes" in bold indicate runs of increasing numbers, that is increasing values of sums, while the row numbers indicate how many numbers the sums consist of. Now it appears that the minimums (and maximums) of these boxes are in order. Now, to me it seems one could exploit this structure to make a search in $O(|S|^3)$ -time. That is, pick a number in a box, then iterate below and above to find the min and max of the box. This is $\Theta(|S|)$. If the max is less than the target, then pick some box to the right of the current one. If the min is greater than the target, then pick some box to the left of the current one. The maximum size of a box is exactly |S|. There are |S|+1 rows to consider (to perform a binary search on). Thus the running time is $O(|S|^3)$, even though the number of boxes is $2^{|S|-2}+2$. 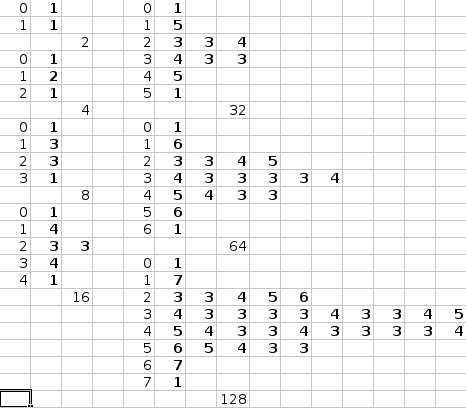 The question is: did I miss something obvious in the analysis? Can this be generalized to some other kind of sets?

edit: Actually, it looks like what is found is a range of boxes instead of a single box. I mean, what prevents the target to fit between the min and max of every box other than the first and the last on a row, say?

So the updated question is: Is there a sub-exponential upper bound on the number of boxes to search?

Browse other questions tagged algorithms algorithm-analysis or ask your own question.

4
Finding the subset of $S$ that sums up to $k$ using a black box in $O(n)$ time
1
Count elements of a sorted matrix that fall into a given interval
5
Find 8 numbers whose sum is closest to a defined value
1
Sort array with minimum swaps
1
Reverse cartesian product matching all given rows
1
Assigning books to boxes
9
Subset sum problem for permutations
0
Is there a faster than O(n^2) solution for Box stacking problem?