How does one compute the probability of a false-based Monte Carlo algorithm being correct rigorously?

Recall that a false-biased Monte Carlo (MC) algorithm is always correct when it returns false for some decision problem i.e. it has a one sided error and its always correct on NO instances.

So if the answer to some problem is YES, then algorithm $A$ will always output YES, while if the answer is NO, it will output NO with probability at least $\frac{1}{3}$.

What confuses me is how one would calculate the probability of the algorithm being correct (say, for only 1 run of it, we can extend it to amplification if we want later). I was told that such an algorithm as described above has probability at least $\frac{1}{3}$ of being correct (i.e. $Pr[\text{correct}] \geq \frac{1}{3}$), however, I wasn't sure how to formally justify this.

These are my thought. For calculating the probability of the algorithm being correct I would write down the total law of probability (and Bayes rule)to decide if its correct:

However, it seems that this is not the approach people take when talking about the correctness of an MC algorithm. I understand that in this paradigm of algorithms one does not think of the input as being randomized, so, is the standard thing to say that the probability of getting any instances is 0.5?

In that case we have:

From my analysis, it seems that the correct thing to say is its correct with probability at least $2/3$ however, one would say that its correct with prob at least $\frac{1}{3}$? I guess it is still correct but I am unsure if this is the correct way to think about it and also why one would say instead that the probability of it being correct is $\frac{1}{3}$ and not $\frac{2}{3}$? (I know that amplification makes which constant we say meaningless, but my question is not about which one we say, but rather how does one calculate the probability of a randomized algorithm being correct).

It seems to me that the usual way to think about it is to consider which type of instance we get separately but I don't quite understand why that is the case. I am saying that is the "usual" way because of the following excerpt: 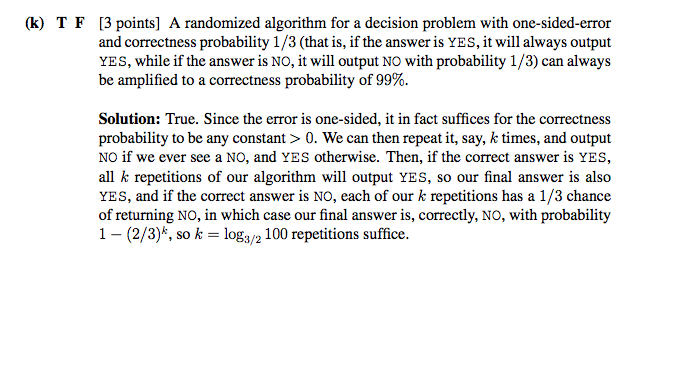 I just want to clarify that I do understand how they got $1 - (\frac{2}{3})^k$ and that isn't what is confusing me. What is confusing me is how one deals with conditional probabilities in Monte Carlo algorithms and how one uses the total law of probability (and marginalization) to deal with these probabilistic events.

I guess my question can also be phrased as why goes the following phrase:

From what I am reading from the solutions, it seems to me that one says an MC algorithm is correct if for each instances NO and YES, for both cases, the algorithm A outputs a correct answer with probability greater than whatever constant one is aiming for...and one doesn't involve the probabilities of the instances because we don't think of the probability of those events?

In other words, an MC algorithm being correct with prob greater than 0.5 doesn't mean we consider the event:

instead, we consider the probability of correct for each instances separately and if both satisfy the inequality that we need, then the algorithm succeeds with the desired probability?

In all cases, the probability is taken (only) over the coin tosses of the algorithm. We can't take probability over $x$ since we are not given any distribution over instances.

The exercise has a slightly unorthodox definition that is useful mostly for the exercise (with $=$ instead of $\geq$).

These definitions are worst-case – the success probability of the algorithm (which can be taken as the optimal $p$) depends on the worst input. In a distributional setting – in which there is a distribution on the instances – we can also consider $\Pr[A(x)=T(x)]$, where $T(x)$ is the type of $x$, and this time the probability is taken over both $x$ and the coin tosses of the algorithm. In this setting it is also common to consider deterministic algorithms. We can consider both two-sided and one-sided algorithms in this setting as well.

Not the answer you're looking for? Browse other questions tagged algorithms algorithm-analysis randomized-algorithms or ask your own question.

5
randomized algorithm for checking the satisfiability of s-formulas, that outputs the correct answer with probability at least $\frac{2}{3}$
6
The Power of Randomized Reduction
6
Why is the probability used in the definition of RP complexity classes, arbitrary?
6
Correctness of Freivald algorithm for checking matrix multiplication, why is the probability of checking $AB \neq C$ at least 1/2?
3
How can we get a Las Vegas algorithm from a Monte Carlo one?
3
A clarification on $PP$
1
Amplification for Randomized Algorithms
1
When does a Monte Carlo algorithm solve a problem?