Given a moving ball in a grid, which squares does the ball reach?

You are given an m x n grid. A dimensionless ball is placed at the centre of one of the grid squares and starts moving in one of 4 directions: north-east, north-west, south-east, or south-west. The ball continues moving until it reaches the edge of the board at which point, it bounces back in accordance with the laws of Physics. 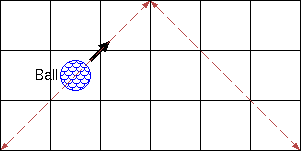 Given m, n, the initial position and direction (NE / NW / SE / SW) of the ball, is it possible to determine whether the ball will ever reach a specified target grid square (x0, y0)?

It is possible to answer the question by exhaustively tracing the movement of the ball, but is there any easier more efficient alternative? Any pointers to related literature would also be much appreciated.

Exhaustively tracing the movement of the ball is the easiest to program, and also not too bad on efficiency grounds. You should keep a hash table of all states of the ball that have been seen before (where the state of a ball is the grid square it is in, and which direction it is heading); if you see it repeat a past state, then you know it will loop forever and you can stop tracing the movement any further. With this way, tracing the ball's movement will take at most $O(mn)$ time in the worst case.

This can be sped up by using a little bit of simple algebra to calculate "given the current state, what's the next wall the ball will hit?" in $O(1)$ time -- that will be faster, but not easier.

There is a more elegant and efficient solution, based upon number theory and on Tom Van der Zanden's technique of extending the grid infinitely.

The second insight is that we can use number theory to answer that question. In particular, after $t$ units of time, the ball will be at position $(x_0+t,y_0+t)$ in the parallel universe. We want to know whether there exists any integers $t,i,j$ such that $x_0+t = 2im \pm x'$ and $y_0+t = 2jn \pm y'$. Re-arranging these equations and using the language of modular arithmetic, we are asking whether there exists an integer $t$ such that both of the following equations hold:

Now we're all set to apply number theory. In particular, this is set up perfectly to apply the Chinese remainder theorem. Define $g = 2 \gcd(m,n)$. Then the above system of equations has a solution in the integers if and only if

In other words, we should check the following four conditions:

10
Complexity for finding a ball that maximizes the number of points lying in it
5
Covering the unit square by smaller squares of variable sizes
4
Maximizing number of selected squares in a grid
3
What are the (efficient) algorithms to cluster squares into groups using a threshold such that the closest squares form groups?
0
How to maximize the number of filled grid squares in a partially filled grid with Tetris shapes
1
Determining the intersections of a line segment and grid