Are there any articles or software which can infer original shapes from overlapping shapes?

Given that some shapes overlap in an image, are there any papers or articles or code which can infer the original shapes from the overlapping?

I am thinking to apply some machine learning to this since I can generate overlapping shapes using code and use a neural network to try to work out the original shapes. Perhaps another way is just heuristic rules. 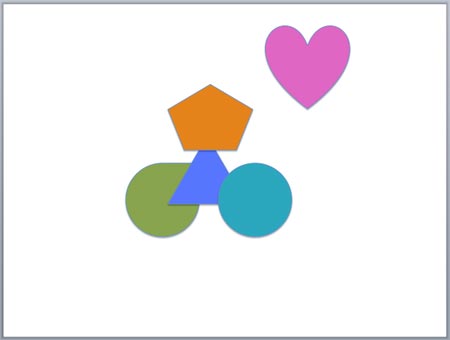 I'd suggest you start with image segmentation, to identify each of the separate (potentially occluded) shapes in the image.

If there was no occlusion, the problem would then be easy. For each shape in the image, you could compare it each possible shape in your library of shapes and see if it's a match. If you don't have to deal with pose/rotation, only possible variation in the size and location of the shape, that will be easy to do: given a shape $S$ from the image and a shape $S'$ from your library of shapes, you first normalize their sizes, then check if they are a match using normalized cross-correlation or something similar. If you do have to deal with variation in pose/rotation as well, you could use something like SIFT to align $S$ to $S'$, then proceed from there.

However in your example you have to deal with occlusion, and it's occlusion that makes the problem more challenging. So, let's re-formulate the problem. You get a bunch of partial shapes $S_1,\dots,S_k$ from your image. For each $S_i$, you can also derive an occlusion mask $M_i$ that indicates which pixels were occluded by other shapes. Now you want a way to test whether $S_i,M_i$ is a match to some shape $S'$ in your library. How to do this?

If you only had to deal with variation in location but not rotation/size/pose, then this would be easy. It basically comes to checking that $S_i$ matches $S'$ at the non-occluded pixels (they don't have to match at the pixels indicated by $M_i$, but they do have to match elsewhere), i.e., whether $S_i \lor M_i = S' \lor M_i$, where $\lor$ denotes bitwise OR.

Not the answer you're looking for? Browse other questions tagged computational-geometry image-processing computer-vision or ask your own question.

5
Does there exist a data compression algorithm that uses a large dataset distributed with the encoder/decoder?
2
How to reconstruct the image from a neural network output?
3
Removing common background in image processing phase for classification
12
Google DeepDream Elaborated
3
Applicability of Machine Learning on Images.
0
How to identify object(s) in image when given a list of all images?
0
Interpolation: How to generate 3D objects from 2D cross-sections?