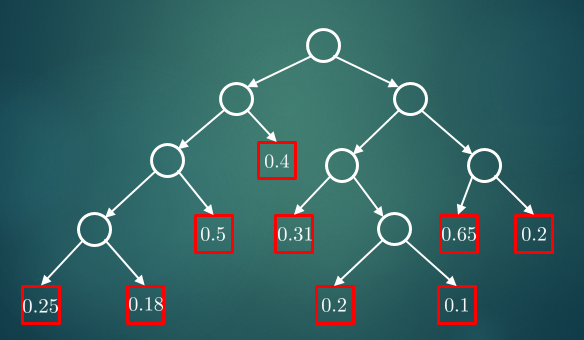 The proof for this is not too difficult. Using induction on the number of terminal nodes, I can easily prove it. The second is not so trivial, and this is where I need help. Before I'll move on to what I'm trying to prove, I'll introduce another concept.
Let's associate now weights with internal nodes: the weight of an internal node is the sum of the weights of its two children.
Example: 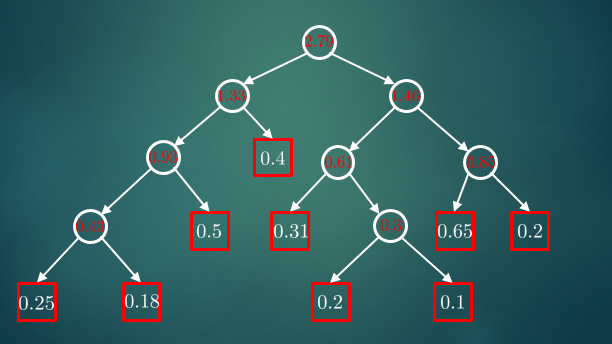 Now for the shocker:

This looks surprising at first, but when you rethink about it, it makes sense (the picture above demonstrates it). My problem is proving it.
I tried proving by induction, but I got stuck in the inductive step (the base case is obvious).

Any help would be greatly appreciated.

The second way @Yuval Filmus suggested:
For the general case: $T$ (with its $n$ leaves) is obtained from a smaller tree, call it $T'$, in which two leaves was removed.
According to the induction hypothesis, the cost of $T'$ is the sum of its $(n-1)-1=n-2$ internal nodes.
Again, how should I proceed? I feel like something is missing...
So suppose I say the cost of $T'$ is: $|T'|=\sum_{i=1}^{n-2}w'_i$, where $w'_i$ corresponds to an internal node. (it is denoted with apostrophe on purpose, to distinguish these weights from the $w_i$s - the weights of the terminal nodes).
Am I on the right track?

Your first question can be proved in both ways. In both cases, the base case is clear: if a tree is a leaf then it has $n=1$ leaves and $n-1=0$ internal nodes.

Your other statement can also be proved in both ways. I leave you the details.

Personally I would not prove the second statement ("the shocker") unless I was explicitly forced to do so by my professor.

The weight in a particular leaf is added to the weight of each of the nodes on the path from the leaf to the root. This is exactly the number of times the weight is counted in the cost of the tree, the depth of the leaf.

Not the answer you're looking for? Browse other questions tagged graphs trees binary-trees induction or ask your own question.