Differences and relationships between randomized and nondeterministic algorithms?

What differences and relationships are between randomized algorithms and nondeterministic algorithms?

A randomized algorithm is an algorithm which employs a degree of randomness as part of its logic. The algorithm typically uses uniformly random bits as an auxiliary input to guide its behavior, in the hope of achieving good performance in the "average case" over all possible choices of random bits. Formally, the algorithm's performance will be a random variable determined by the random bits; thus either the running time, or the output (or both) are random variables.

Are randomized algorithms and probabilistic algorithms the same concept?

If yes, are randomized algorithms just a kind of nondeterministic algorithms?

Why do we care about non-deterministic algorithms? There is a class of problems, known as NP, which consists of decision problems which have efficient non-deterministic algorithms. Most people think that the hardest problems in that class, the so-called NP-complete problems, do not have efficient deterministic (or even randomized) algorithms; this is known as the P vs NP question. Since many natural problems are NP-complete, it is interesting to know whether in fact they are not solvable efficiently, in the worst case (oftentimes, the instances which arise in practice are in fact solvable in reasonable time).

An algorithm specifies a method to get from a given input to a desired output that has a certain relation with the input. We say that this algorithm is deterministic if at any point, it is specified exactly and unambiguously what the next step in the algorithm is that must be performed as part of that method, potentially dependent on the input or the partial data computed so far, but always uniquely identified.

Nondeterminism means that some part of the algorithm is left under or even unspecified. For example, "int i = an even number between 0 and n" is underspecified. This means there is no unique behavior that is specified at this point.

For this distinction to be useful, you need the (usual) concept of 'correctness' for (deterministic) algorithms, which informally is that "the algorithm always computes what I want it to compute". It then becomes interesting to think about what correctness would mean for nondeterministic algorithms, which must take into account the choices possible in underspecified instructions.

There are two ways of defining correctness for nondeterminism. The first one is rather simple and less interesting, for which correctness means "the algorithm always computes what I want it to compute, for all sequences of choices I am allowed to make". This sometimes occurs if an author of a bit of pseudocode is too lazy to pick a number and says "pick any even number between 0 and n", when "pick 0" would have made the algorithm deterministic. Essentially, by replacing all nondeterminism by the result of some choice you can make the algorithm deterministic.

The interesting definition of correctness for nondeterministic algorithm is "the algorithm always computes what I want it to compute, for some sequence of choices I am allowed to make". This means that there may be choices that are wrong, in the sense that they make the algorithm produce the wrong answer or even go in an infinite loop. In the example "pick any even number between 0 and n", perhaps 4 and 16 are right choices, but all other numbers are wrong, and these numbers may vary depending on the input, the partial results and the choices made so far.

If we throw running time into the mix, then things become even more interesting. The running time of a nondeterministic algorithm is usually taken to be the minimum over all (right) choices. However, other choices may lead to a dramatically worse running time (which can be asymptotically worse or even arbitrarily worse than the minimum), or even an infinite loop. This is why we take the minimum: we do not care about these weird cases.

Now we get to randomized algorithms. Randomized algorithms are like nondeterministic algorithms, but instead of 'allowing' the choice between 0 and 1 at certain points, this choice is determined by a random coin toss at the time that the choice has to be made (which may differ from run to run, or when the same choice has to be made again later on during the execution of the algorithm). This means that the result is 0 or 1 with equal probability. Correctness now becomes either "the algorithm nearly always computes what I want it to compute" or "the algorithm always computes what I want it to compute" (just the deterministic version). In the second case the time the algorithm needs to compute its answer is usually 'nearly always fast', contrasting with a deterministic 'always fast'.

Contrasting the three: deterministic algorithms exactly specify the answer to the choice, nondeterminism leaves it completely open, but tells you a 'right' answer exists, and randomization leaves the answer up to chance. Note that you can just guess the right coin tosses, which gives rise to a hierarchy between these three: nondeterminism is as powerful as randomization, which in turn is as powerful as determinism, or, with respect to polynomial time, $P \subseteq ZPP \subseteq NP$. In this setting, no proofs are known whether any is strictly more powerful than another.

In short: non-determinism means to have multiple, equally valid choices of how to continue a computation. Randomisation means to use an external source of (random) bits to guide computation.

In order to understand nondeterminism, I suggest you look at finite automata (FA). For a deterministic FA (DFA), the transition function is, well, a function. Given the current state and the next input symbol, the next state is uniquely defined.

A non-deterministic automaton (NFA), on the other hand, has a transition relation: given the current state and the next input symbol, there are multiple possible next states! For example, consider this automaton for the language $(ab)^*(ac)^*$: 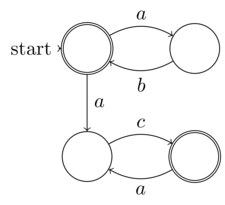 The automaton guesses which $a$ marks the border between $(ab)^*$ and $(ac)^*$; a deterministic automaton would have to postpone its decision until after having read the symbol after each $a$.

The key point here is that acceptance is defined as "accept if there is an accepting run" for NFA. This existence criterion can be interpreted as "always guessing right", even though there is no actual guessing.

Randomisation is quite different. If we break it down, the automaton/program does not have multiple choices for continuing execution. Once the random bit(s) are drawn, the next statement is uniquely defined: 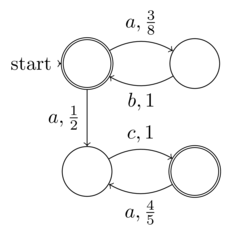 Now every word has a probability, and the automaton defines a probability distribution over $\{a,b,c\}^*$ (differences between $1$ and the sum of outgoing edges is the probability of terminating; words that can not be accepted have probability $0$).

We can view this as a deterministic automaton, given the sequence of random decisions (which models practice quite well, as we usually use no real random sources); this can be modelled as a DFA over $\Sigma \times \Pi$ where $\Pi$ is a sufficiently large alphabet used by the random source.

One final note: we can see that nondeterminism is a purely theoretical concept, it can not be implemented! So why do we use it?

You should be aware that there are two different definitions of nondeterminism being thrown around here.

In CS, nondeterminism usually means (2), so Wikipedia's definition you gave (which is (1)) is misleading. Most of the answers given so far explain (2), not (1).

Revisiting this due to some related research I am doing, the disagreement between myself and some of the others who answered, can be assimilated into a holistic understanding in which we were all correct. But IMO the adopted computer science terminology “bounded nondeterminism” is an incorrect oxymoron (which was my point before).

They key point is to distinguish between bounded and unbounded nondeterminism.[1]

Nondeterministic Turing machines (aka “NTMs”) have bounded nondeterminism in that each state transition has a bounded number of possibilities, i.e. the number of programs (aka “configurations”) is finite. The tape remains unbounded, so the proof of termination remains undecidable. But for any given input that halts, the output is deterministic and bounded in time― i.e. for any input the result is deterministic or doesn’t terminate. Also NTMs execute all possible configurations in parallel, so they execute exponentially faster than emulation of NTMs on deterministic Turing machines (aka “DTMs”).[2]

There really isn’t any nondeterministic relationship between inputs and outcomes in NTMs because the outcome is always the same for any input or initial state, which is evident because they they can be emulated by DTMs without any added randomness.[2] Undecidable is not the antithesis of deterministic, because not halting is also a deterministic result. Deterministic machines always have the same outcome for a given input, even when that outcome is to not halt. The localized nondeterminism of NTMs is in each state transition of the executing algorithm. It is undecidable a priori which path of the tree might terminate providing the output state. But undecidability is not nondeterminism. Thus the term “bounded nondeterminism” is intended to describe the localized indeterminacy within the state machine but not the relationship of inputs to results, hence the concept of “bounded”. I still think the term “bounded nondeterminism” is an oxymoron and it could have been more accurately described as a “parallelized state transition” Turing machine.

Apart from all the answers which explain the difference, I have an example which may help you get the thing they want to say.
Consider a coin toss, you either get a H or a T. If the coin toss is random, it is highly likely that out of 1000 coin tosses, 500 would be H and it is quite unlikely that 999 out of them would be H. But if the coin toss is non-deterministic, we can't say that getting 999 H would be highly unlikely.