Finding the height of all nodes in a forest

I have a forest, i.e., nodes with directed edges and no cycles (directed or undirected). I define the height of a vertex $v$ as 0 if it does not have any incoming edges, or the maximum number of edges to traverse in reverse to reach a vertex of height 0. 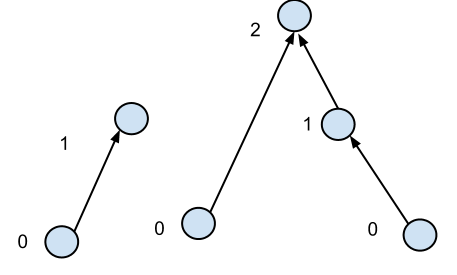 I also know that the average degree of a node is a small constant, say 2 or so. To find the height of all vertices, I can think of two algorithms:

First of all, it depends a bit how you can access your data to say which algorithms works best.

Anyway, I would suggest to determine the heights in a top-down fashion rather than bottom-up. I personally think that a top-down approach is conceptually nicer and easier to analyze. For any vertex $v$ in the forest it is true that

So you can scan for all roots, and then determine the heights by divide an conquer. You will touch every vertex at most twice (scanning for the roots + traversing). In the approach that you have suggested you might have to touch some vertices many times.

Btw, since you have a forest, you have less edges than vertices, so you know that you have average degree less than two (and therefore you can test for roots in linear time).

I don't know if this problem has an official name or not. Your title sums it up well enough. Walking up from the 0 height nodes will be fast, provided you take care to avoid duplicate work. Suppose you have a node with many children and a long path above this node to the root. Suppose also that the heights of each of the children are different. Each child may update the height of the node in question. That's ok. But you should avoid also updating the long path above that node until all its children have reported their heights.

The resulting algorithm will run in linear time, and the pseudo-code would look something like this:

A problem so similar it might be of interest is "Parallel Prefix on Rooted Directed Trees." The algorithm finds the number of edges to the root from each node. So the roots ends up with a the value 0, while e.g. the bottom right node would end up with a value of two.

Note that the algorithm below solves the more general problem for weighted edges, but you can just initialize the W(i) to 1 for all i. And each node i's successor is given by P(i)=j.

The image below illustrates the "halving" of the path lengths and makes the logarithmic running time easy to understand. It does not show the node heights computed though. 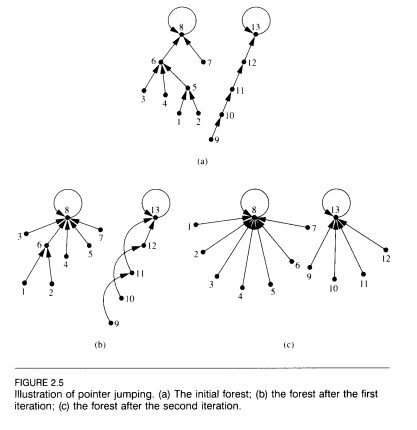 (from "Introduction to Parallel Algorithms" by Joseph Jaja).

Using multiple processors, it is solvable in O(lg n) time, but uses O(n lg n) operations. There is a hack to get it down to linear work, but it is slightly involved.

Not the answer you're looking for? Browse other questions tagged algorithms trees graph-traversal or ask your own question.

3
Correctness of splitting an undirected tree into a forest of trees with even number of children
2
Algorithm for finding all the heaviest edges in a graph
2
DAG with modulo 3 restrictions
1
How to minimally extend a digraph such that all nodes are on a cycle?
3
Shortest path with a start vertex that touches all nodes at least once with repeats allowed
1
A problem to maximize the number of edges in a cycle while minimizing the total weight
5
The same outgoing and incoming degree in graph