How can we prove that such a set of entries always exists?

Here is an example solution with a $3\times3$ table. 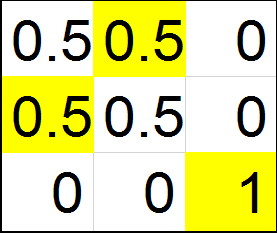 The Birkhoff–von Neumann theorem states that a doubly stochastic matrix (a matrix with non-negative entries in which rows and columns sum to 1) can be written as a convex combination of permutation matrices (0/1 matrices which contain precisely one 1 in each row and column). This immediately implies your result.

If you don't want to assume this theorem, you can use Hall's theorem directly. Given your table $A$, define a bipartite graph by having $n$ row-vertices, $n$ column-vertices, and connecting row $i$ and column $j$ if the $(i,j)$th entry is non-zero. Your goal is to find a perfect matching in the graph.

This argument shows that you can use standard algorithms for finding maximum matchings in bipartite graphs to actually find your $n$ entries.

We are now at an excellent position to prove the Birkhoff–von Neumann theorem. The proof is by induction on the number of non-zero entries. The argument above shows that there are at least $n$ non-zero entries, and in that case it's not hard to see that the matrix must be a permutation matrix, completing the base case.

Not the answer you're looking for? Browse other questions tagged proof-techniques matrices search-problem or ask your own question.

4
Complexity of transposing matrices represented as list of row or column vectors
2
Finding median of three sorted array (the same length)
1
Naive argument that P ≠ NP
2
Find the maximizing row-column matches in a matrix
1
Algorithm to find if there are N 1's in a matrix where no two 1's are in same row or column
4
Given a row sum vector and a column sum vector, determine if they can form a boolean matrix
1
Difficulty in understanding the proof of "Every context-sensitive language L is recursive" as given in the Peter Linz text