It has been shown that any Linear Program (LP) can be solved in a polynomial number of steps. An example of such algorithm is the ellipsoid method.

To solve a problem which has $k$ variables and can be encoded in $L$ input bits, this algorithm uses $O(k^4L)$ pseudo-arithmetic operations on numbers with $O(L)$ digits.

I have a problem that can be formulated as a LP, but yet has been proven to be NP-hard. The proof is rather hard and complicated for my understanding, so I just want to argue why it is, at least, not in P.

Consider the following excerpts from here. 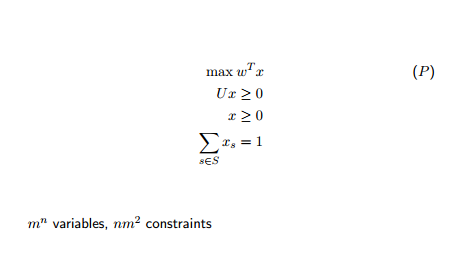 I can see why the ellipsoid algorithm (or any LP solving algorithm) would take exponential amount of steps because the number of variables $k$ is exponential in $n$ ($k = m^n$).

In some cases it is possible to solve linear programs with exponentially many constraints efficiently. This is the case if there is a separation oracle which, given a variable assignment, outputs a violated constraint (if any). If this can be done efficiently, then the ellipsoid algorithm can solve the linear program efficiently (at least approximately). If your problem is NP-hard then there is (probably) no efficient separation oracle for the dual LP. (Another possible reason for your problem to be hard is that rounding a solution could be hard or, perhaps, impossible.)

Not the answer you're looking for? Browse other questions tagged time-complexity optimization np-hard linear-programming game-theory or ask your own question.