Why is c) a combinational circuit, but d) not?

I am doing practice after just learning what combinational circuits are, yet I am unsure of why (c) is combinational, but (d) is not. Can someone please explain to me why this is? The Solution mentions that for (d) node n6 connects to the output terminals of both I3 and I4, but how is this different from the circuit in (c)? 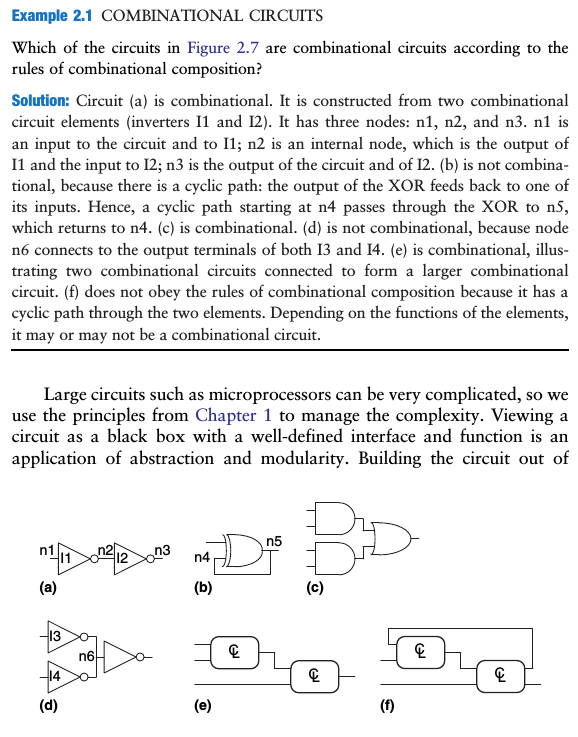 A combinatorial circuit corresponds to a "straight-line program" that computes the outputs of the circuit given its inputs. (It has to satisfy some constraints that will exclude circuit (f) among others.)

It also corresponds to the formula $(x_1 \land x_2) \lor (x_3 \land x_4)$. However, not every circuit corresponds to a formula. (The difference is that in some circuits, the output of a gate can appear as an input to more than one gate.)

The difference between circuit (c) and circuit (d) is that in circuit (c) wires are not joined together. Rather, the output of each of the AND gates is connected to its own input of the OR gate. In contrast, in circuit (d) the rightmost NOT gate has only one input, but two incoming wires that must share the same input pin.

Not the answer you're looking for? Browse other questions tagged computer-architecture logic circuits digital-circuits or ask your own question.

1
What is combinational circuit?