The minimum zap problem below is Exercise 11 in Jeff Erickson's lecture on "Greedy Algorithm".

The minimum zap problem can be stated more formally as follows. Given a set $C$ of $n$ circles in the plane, each specified by its radius and the $(x, y)$ coordinates of its center, compute the minimum number of rays from the origin that intersect every circle in $C$. Your goal is to find an efficient algorithm for this problem. (See a "9-balloons-with-4-rays" example in the figure below) 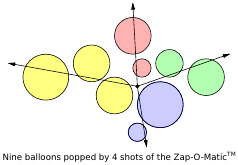 Question: Suppose it is possible to shoot a ray that does not intersect any balloons. Describe and analyze a greedy algorithm that solves the minimum zap problem in this special case.

I'm having trouble approaching this problem. I thought a greedy approach would be to use the ray that intersects the most circles and recurse, but I was told this was wrong. Why is this?

And what is the point of the fact that there is a ray that does not intersect any balloons? Am I supposed to prove that some optimal solution uses this fact?

Any help would be appreciated! I just recently started learning algorithms :)

Note: Did not use O( n log n) implementation

Now we will prove the correctness of this algorithm using mathematical induction. We will show that our greedy algorithm cannot do worse than the optimal solution.

Our base case is when $n = 1$. There is only one object to destroy, and our greedy algorithm uses 1 ray, which also happens to be optimal. So this checks out.

Now for our induction hypothesis, we will assume that our greedy algorithm is optimal for up to $n$ objects.

We now claim that the first ray from $\alpha$ of $S'$ cannot do worse than that of $S$.

Now let's consider an $n+1$ object situation. Then, we sort $S'$ and $S$ according to $\alpha$, clockwise. Now let's examine the first ray that occurs from $\alpha$ clockwise. In $S'$, this first ray, call it $R'$, cannot possibly do worse than that of $S$, call it $R$, because our greedy algorithm says that this ray will intersect the most objects, including the first one from $\alpha$. Therefore, $R$ either intersects just as much or fewer objects than $R'$. Thus, we can replace $R$ with $R'$ in the optimal solution $S$.

Principle: You need to shoot the rays in some order and choose carefully the proper direction/angle for the first ray.

$Q_1:$ I thought a greedy approach would be to use the ray that intersects the most circles and recurse, but I was told this was wrong. Why is this?

See the figure in the problem. Suppose there are only 4 balloons: the two green ones and the two blue ones. If you shoot your first ray along the x-axis (this is allowed by your greedy strategy. note that I suppose that the three bigger balloons cannot be hit by a single ray; otherwise, move them around slightly), you will leave the two other balloons far apart. As a result, it costs you 3 rays, but the optimal is 2.

$Q_2:$ What is the point of the fact that there is a ray that does not intersect any balloons?

So the key point is to shoot the first ray along the right direction. Here comes the fact that "there is a ray that does not intersect any balloons".

The basic idea is as follows:

$Q_3:$ Am I supposed to prove that some optimal solution uses this fact?

It is not easy to prove a greedy strategy is correct. You can try to prove the idea above by applying mathematical induction and exchange argument (or maybe show it is wrong!). A hint is to consider the set of rays shot by an arbitrary algorithm, sort them by angles with respect to $\alpha$ (clockwise), then compare it to the optimal solution one by one.

Implementation: In the comments, OP asks for an $n \log n$ algorithm. Well, $n \lg n$ often means that you can sort some things first. Maybe sort all the balloons by the angles of their right (clockwise again) tangle lines. Then it is easy to apply the greedy strategy above. This is a rough idea. How to implement it efficiently by choosing/designing good data structures is left as an exercise.

Not the answer you're looking for? Browse other questions tagged algorithms optimization greedy-algorithms or ask your own question.

15
Correctness-Proof of a greedy-algorithm for minimum vertex cover of a tree
3
How does "Greedy Stays Ahead" Prove an Optimal Greedy Algorithm?
2
Find minimum number of time points that cross out all intervals
0
Vertex Cover special cases
0
Will a Greedy algorithm give a correct result for minimum partition?
2
What do we call a greedy algorithm that tracks the best $n > 1$ solutions?
1
Minimum Number of Integers From a List that Add up to N (Dynamic Programming)
0
How to prove the my greedy algorithm for placing guards?