Graph algorithms for vulnerability and optimality of network

I am studying a research paper which is concerned with finding paths from a source nodes to a single sink node keeping in mind 2 things.

1.The security of the path.

2.The optimality of the path.

It basically defines the vulnerability of a link by the value of $No(e)$, where $e$ is the edge and it applies a constraint that the link cannot be used by more than $No(e)$ paths for the link to be secure, other wise it is likely to get attacked.

Here are important points about the research paper.

To guarantee network security, the constraint vulnerability for each link $e$ is set to $No(e)$, which is a positive integer.

$s$ is the single sink node and $P$ is the set of sources.

Definition 1: An $s-P$ cut (Ecut) is defined as the set of links satisfying that if these links are removed, node $s$ and nodes in set $P$ are disconnected, meaning all the sources will be disconnected from the sink node. The weight of $s-P$ node cut is defined as

The $s-P$ node cut with minimum weight is defined as $C_{min}$. This also serves as the upper bound for the number of sources allowed to transmit, or mathematically it means

Up to this point I have understood it completely. The upper bound on $|P|$ can be very easily derived, by analysing the boundary condition. Suppose we allow exactly $C_{min}$ number of sources to transmit and $C_{min} = \sum{No(e)}$ for all the edges in the cut with minimum weight. Now say $No(e)$ paths go through first edge in the cut, No(e) paths go through second edge in the cut and so on. But if anywhere $No(e)+1$ paths go through an edge keeping everything same(or in other words having sources $C_{min} + 1$) then vulnerability constraint is broken as link can at most be used by $No(e)$ paths.

Further the research paper is:Which I am not comfortable with is

Let us use a strategy to convert undirected to directed graph with the objective of devising an algorithm with the help of network flow theory.

Algorithm 1: Computing the number of source nodes using each arc for the data transmission. 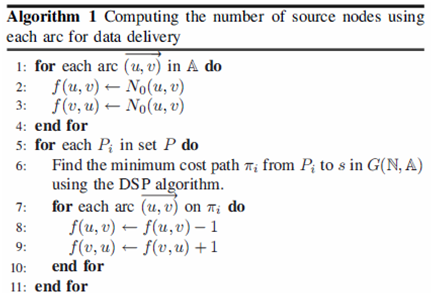 But my question is why was the need for arcs, we could have applied the dijkstra on undirected graph and then could have also got this, what is that I am missing.

Further the paper proposes that the cost $r(u,v)$ is added to each link in the undirected graph but does not specify whether both $r(u,v)$ and $r(v,u)$ is added

The second alogirthm, which i could not understand as to why the deletion of links is happening and also minimal explanation in paper of it is given. 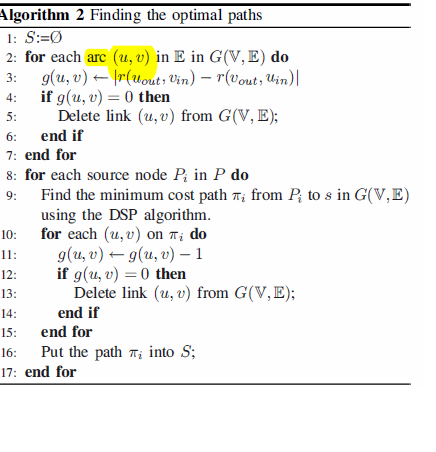 Can somebody explain the second algorithm and its link with the first one and try to explain the bigger picture so that I can understand what is going on.

Browse other questions tagged algorithms graphs or ask your own question.

25
Finding the minimum cut of an undirected graph
0
Algorithm for Graph merge and recompute
4
Birkhoff-von Neumann theorem for bistochastic digraphs
1
Computing the k shortest edge-disjoint paths on a weighted graph
2
optimal flow for index multiple source and destination in directed graph
0
Weighted graph clustering with maximum size constraint
1
How to solve the minimum-cost flow problem on a complete graph, with a concave cost function of flow for each edge?