Minimax algorithm when all the options are the same

tl;dr What does the Minimax algorithm do when all its options are the same? 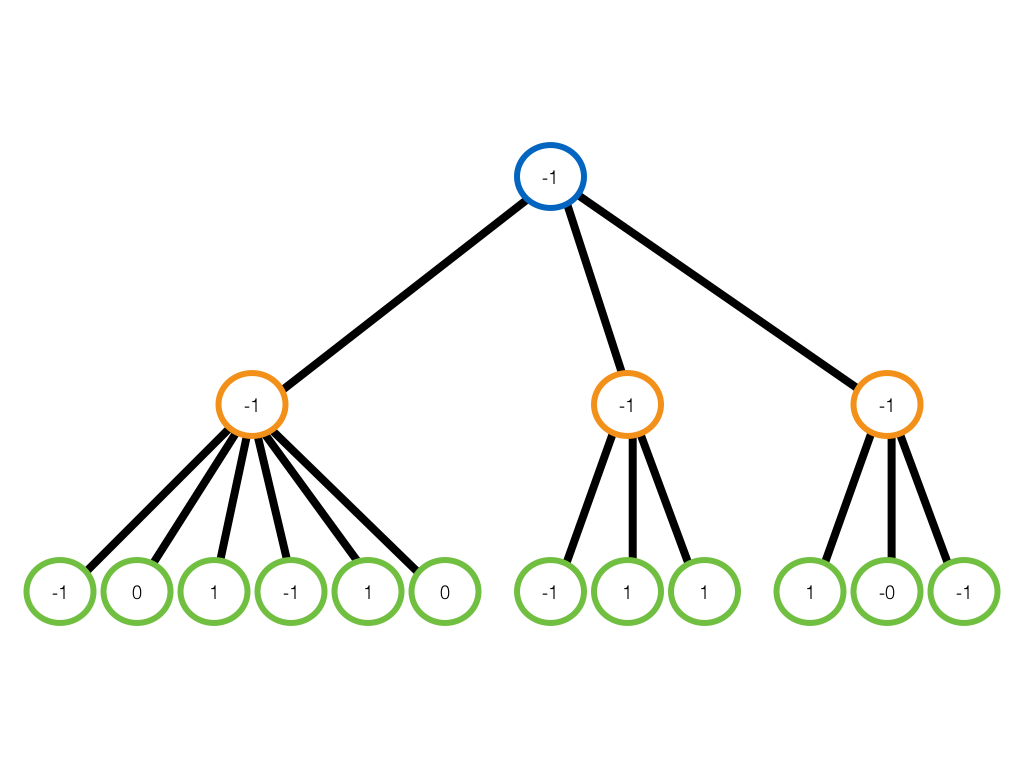 Imagine this is the tree for a game (tic-tac-toe, maybe?). What should the computer do? Pick one at random? Pick the one which on average has the best score (the second one)?

I'm making a program to play Quoridor, and I figure that the Minimax algorithm is the best choice (with some pruning of the really bad ones; otherwise, it would be way too big). The problem is, every choice you can make (the beginning ones in particular) have a chance to loose, and every loss has the same value (-1). So how can I pick the best moves, if all the options are the same?

Shaull's answer is absolutely correct, and by referring Zermelo's theorem it is pointing in the right direction.

However, beyond the observations done on the rationality of your opponent, the point here is that Minimax is pretty good for strategical games where a single mistake could lead to a disaster, e.g., chess ---where just overlooking a single move can lead to checkmate. On the other hand, if no such strategical flaws are likely (e.g., Omweso and I think Quoridor also to some extent) then Monte-Carlo sampling is a much better option.

For a thorough study on the topic, see:

(which was actually awarded a honorable mention for best student paper). In this case, the purpose of such algorithm is to follow good lines of action instead of preventing a loss. Monte-Carlo sampling is also the best option to use in case your branching factor is too large (so that minimax and any of its variants such as alpha-beta become infeasible), e.g., Go.

Be aware however, that one of the options used much often in Monte-Carlo sampling, UCT, does not seem to be so good in the end. For a good discussion on the topic, see:

Carmel Domshlak, Zohar Feldman. To UCT, or not to UCT?. Proceedings of the Sixth Annual Symposium on Combinatorial Search. Leavenworth, Washington, USA, 2013.

By Zermelo's theorem, which can itself be thought of as a version of minimax, each such game has a winning strategy for one of the players (or a strategy to force a draw).

Thus, if your algorithm encounters a node with all its children having the same value, then conceptually it doesn't matter which option you take, you are guaranteed to get the value of that node.

Having said that, the minimax algorithm computes an optimal strategy against an optimal, rational, opponent. If your opponent is assumed to be "human" (i.e. might be irrational, misinformed, computationally bounded, or plain stupid), then you can perhaps do better than just running minimax. Then, you should consider incorporating heuristics, randomness, etc.

Not the answer you're looking for? Browse other questions tagged algorithms search-algorithms trees or ask your own question.

8
What use are the minimum values on minimax trees?
8
What is the name of this logistic variant of TSP?
4
Algorithm(s) for creating balanced 5-a-side teams?
2
Perturbing trees
0
The fastest way to check if a move is a winning move in Tic Tac Toe
4
Maximal Win Score Distribution