I know the following fact:

It was backed by the fact that Any number greater than 8 can be factored into sum of 3s and 5s.

Q.2 If yes, then should forming union DFA by forming product DFA (and making desired states final as required by union operation) of above two languages $(111)^*$ and $(11111)^*$ and then applying DFA minimization by finding equivalent states result in 9 states? I tried it as below using JFLAP (product DFA on left and auto generated min DFA on right). But I didnt get 9 states. Instead I got number of states $=LCM(3,5)=15$ states. 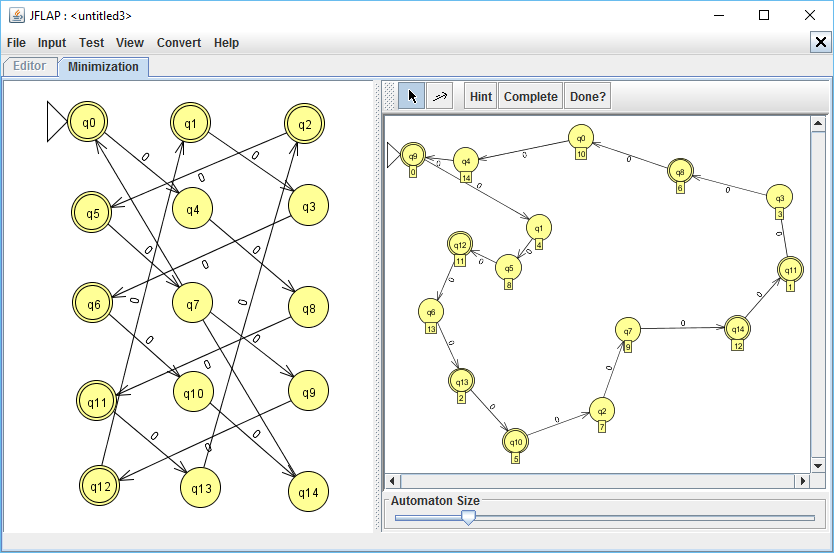 Q.3 So can we conclude we cannot always get minimum DFA by the approach of combining equivalent states (may be especially when the DFA can be simplified using some mathematical insights)? Or did I made some mistake?

I think that leads to the remaining confusions.

Not the answer you're looking for? Browse other questions tagged formal-languages automata finite-automata compilers or ask your own question.

5
DFA with limited states
3
does a DFA converted from NFA always contain 2^Q states?
3
NFA to DFA final states proof
1
Can quantum computer compute the minimal intersection DFA of numerous minimal DFAs in polynomial time using polynomial number of qubits?
0
Minimal DFA: Number of states
2
Does NFA to DFA conversion give the minimal DFA as result?
1
Minimal DFA with more states than its equivalent NFA
2
Number of states in DFA equivalent to given NFA