When are two simulations not a bisimulation?

Given a labelled transition system $(S,\Lambda,\to)$, where $S$ is a set of states, $\Lambda$ is a set of labels, and $\to\subseteq S\times\Lambda\times S$ is a ternary relation. As usual, write $p \stackrel\alpha\rightarrow q$ for $(p,\alpha,q)\in\to$. The labelled transition $p\stackrel\alpha\to q$ denotes that the system in state $p$ changes state to $q$ with label $\alpha$, meaning that $\alpha$ is some observable action that causes the state change.

One LTS is said to simulate another if there exists a simulation relation between them.

Two LTSs are said to be bisimilar iff there exists a bisimulation between their state spaces.

Clearly these two notions are quite related, but they are not the same.

Under what conditions is it the case that an LTS simulates another and vice versa, but that the two LTSs are not bisimilar?

Because a CCS process is worth a thousand pixels – and it is easy to see the underlying LTS – here are two processes that simulates each other but are not bisimilar:

Why can they simulate each other, then? Because $P$ simulates $Q$ since it can do everything $Q$ does. And $Q$ simulates $P$ because even if $P$ can go in one $a$-step to a program that does nothing, $Q$ can still do that $a$-step, and that's all it takes to simulate something. The key difference with the bisimulation is really that, as Charles said, you have to relate the same processes with both simulations. (i.e. $\mathcal R$ such that both $\mathcal R$ and $\mathcal R^{-1}$ are simulations) 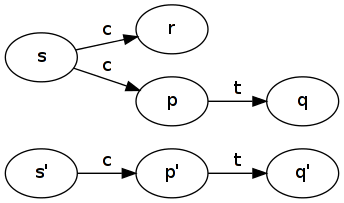 The difference between the two machines is that the good machine is deterministic and (assuming liveness) always delivers tea if you insert a coin, whereas the evil machine may on a whim take the coin but become stuck, unable to deliver tea.

This kind of difference comes up often in the study of concurrent systems. jmad's answer shows a CCS process with this LTS.

For more information about bisimulations, I recommend Davide Sangiorgi's notes On the origins of bisimulation and coinduction. (This is exercise 1 p. 29, and the notes use the same example.)

Not the answer you're looking for? Browse other questions tagged programming-languages formal-methods semantics process-algebras or ask your own question.

6
Late and Early Bisimulation
15
Type inference with product types
4
How to implement simulation on two LTSs?
5
When are Dynamic and Lexical Scoping equivalent?
3
How to quickly find a few bisimulations on a given labelled digraph?
2
What are these questions in the PoplMark challenge asking?
5
Problem with definition of bisimilarity
3
Weak bisimulation up-to $\approx$
0
Stratification of Bisimilarity : $\sim$ does not coincide with $\sim_\omega$