An NFA with no equivalent DFA with fewer than $2^n$ states: Example and Proof

I have been following the book Introduction to Automata Theory, Languages, and Computation by John E. Hopcroft and Jeffery D. Ullman.

I came across the following topic titled Bad Case for Subset Construction (2.3.6). I cannot follow the example given over there, about NFA N that can accept strings with 1 at the $n^{th}$ position, and that the DFA formed from that NFA thereafter will have no equivalent with fewer than $2^n$ states.

Here is an extract from the book itself: 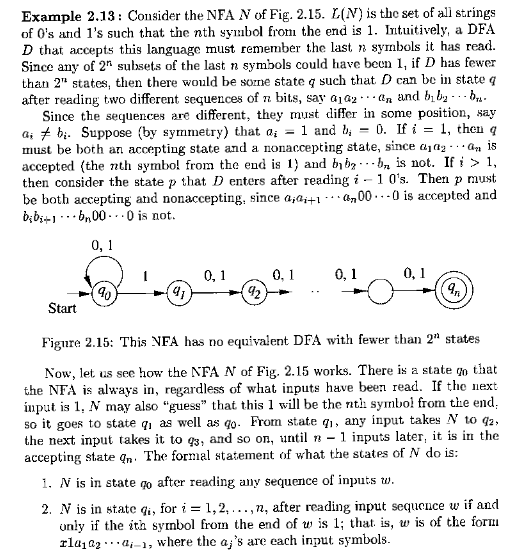 I have been trying to comprehend the proof, including this line and the subsequent paragraph that follows, but I have not been able to.

Can someone please explain the approach ?

The proper way to do this proof is using Myhill–Nerode theory, which I will now explain. For a regular language $L$, say that $x,y$ are inequivalent if there exists a word $z$ such that $xz \in L$ and $yz \notin L$, or such that $xz \notin L$ and $yz \in L$. In every DFA accepting $L$, the state that is reached after reading $x$ is different from the state that is reached after reading $y$ (exercise). Hence, if we find a collection $x_1,\ldots,x_M$ of words such that $x_i,x_j$ are inequivalent for all $i \neq j$, then every DFA for $L$ must contain at least $M$ states (exercise).

The text is arguing as Yuval does; they're just hiding any mention of Myhill-Nerode. Here's an unpacking of their argument:

Continuing, it's easy to see that no matter where the two inputs differ, by appending $i-1$ zeros (or anything else) to the two strings we'll find ourselves in a state which must be both accepting and non-accepting, so our original assertion, that $D$ has fewer than $2^n$ states, must have been false, which is just what we wanted.

3
Are statecharts with parallel states NFA, DFA, or none of the above?
3
Closure under reversal of regular languages: Proof using Automata
3
Minimum number of states in dfa accepting binary number with decimal equivalent divisible by $n$
0
Constructing an FSA, where Ratio of number of states of FSA to its Minimal DFA Equivalent < 0.5
1
Minimal DFA with more states than its equivalent NFA
4
Can't Understand this Subset Construction Proof
2
Polynomial-time Compute the Number of States resulting from the NFA to DFA (greedy) conversion?
1
Languages such that DFA requires $\Omega(c^k)$ states but NFA needs only $O(k)$ states?