Is the Nearest Neighbor Algorithm a valid algorithm to find a Minimum Spanning Tree?

The Nearest Neighbor Algorithm traverses a graph starting at one vertex, and then it travels to the next vertex following the edge with the shortest distance (lightest weight) between them.

An MST is a subgraph of the original graph whose vertices are all connected. The total of the edge weights in the subgraph should be as small as possible. You can use Kruskal's algorithm to find MSTs.

As I was looking at the paths taken when implementing the Nearest Neighbor Algorithm, I noticed that it could possibly sometimes return a MST.

Is the Nearest Neighbor Algorithm a valid algorithm to find a Minimum Spanning Tree?

It seems like it should be. It's terribly similar to Kruskal's algorithm (from what I have read so far). However, I never see it listed as a possible option for finding MSTs.

Thanks for any help in advance.

The Nearest Neighbor Algorithm is described here. From what I read, it works like so:

Here is an example:
Each vertex is visited and, looking at the red lines, you get an MST for that graph. 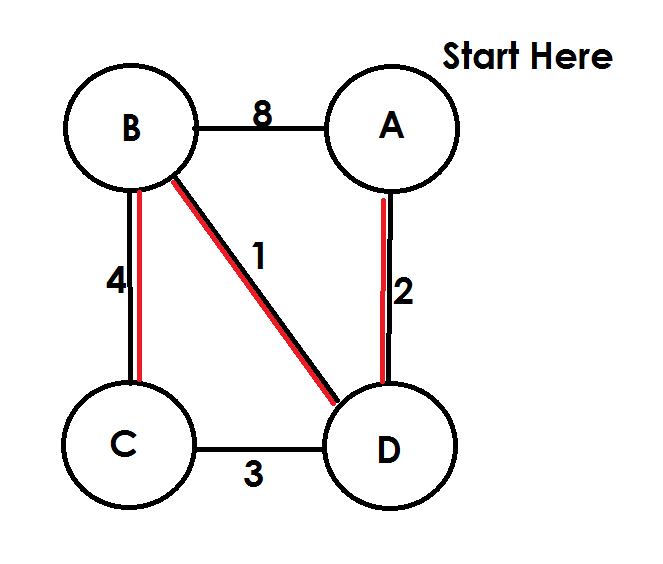 If you do that, you get an MST. My question is, is that a valid way of getting an MST? It seems like it is since it's so much like Kruskal's or Prim's algorithm.

Your algorithm starts at some vertex and then always move to the closest vertex that's not been visited so far. That's not guaranteed to find the minimum spanning tree, as the example in your question shows.

First, in a general graph, the algorithm might get stuck: you might end up at a vertex where you've already visited all the neighbours. For example, if you start your algorithm at $D$, it will go to $B$, then $C$ and then it's stuck because it's already visited both of $D$'s neighbours. The set-up of Hamiltonian cycle avoids this possibility by having an edge between every pair of vertices.

Your algorithm (if I understand it correctly) is known as Prim's algorithm, another algorithm that finds a minimum spanning tree.

Not the answer you're looking for? Browse other questions tagged graphs graph-traversal minimum-spanning-tree nearest-neighbour or ask your own question.