Tree of Despair: Collecting Data from a Tree with Multiple Types of Branching 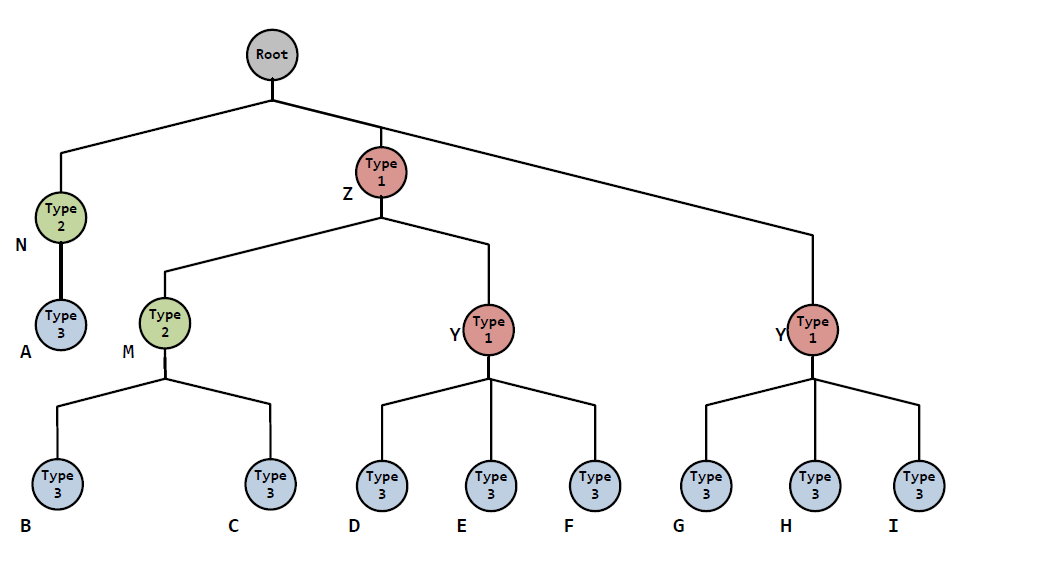 Provided is a tree with three types of node. The structure of the tree cannot be modified and traversal of the tree is limited to querying a node for its children or its parent.

The objective of the algorithm is to traverse the tree from the root node and collect all of the valid combinations of the data in the tree.

A node of type 1 is an occluding node. Any node that is a child of this type of node cannot “see” the data in the other branches of the parent type 1 node. In the diagram there are two instances of type 1 nodes, Y and Z. Note that the Y instance occurs twice. Type 1 node instances can occur multiple times in the tree and can be at any level below the root. Separate occurrences - of a single instance of a type 1 node - always have the same number of branches as children, but will contain different data. The branches of a type one node have known labels.

Nodes of type 1 can occlude other nodes of type 1. For example, if we take the left branch of Node Z on the diagram (to Node M), then the instance of Node Y on the right branch of Z is occluded from Node M (its data cannot be combined with data from Node M). Therefore, data nodes B and C will never combine with D, E, or F.

A node of type 3 is a data node. These nodes contain information that can be combined with information from other data nodes. The collection of these nodes into valid combinations is the goal of our tree traversal. There are no restrictions on the parent-child relationships of node types. A node of type 1 can be a child of a node of type 2 and vice versa. Type 1 and 2 nodes can be children of type 3 nodes. The data in a type 3 node with children of type 1 or 2 will be visible to all its children and to all other simultaneous non-occluded nodes in the tree.

The root node of the tree is of type 2, simultaneous.

Calling the function to retrieve the children of a node may return null, indicating a leaf has been reached.

A summary of the rules:

Traversal can be done by calling two functions:

Given these rules, the valid data combinations for the example tree provided are: ABCG, ABCH, ABCI, ADG, AEH, and AFI.

This description is the best way I can distill the problem to its essential components. The example I gave doesn't reflect all the possible relationships between nodes in the tree (I don't have any type 3 nodes with children, for example). Any help with ways to break the problem down, simplify, and approaches to solving this problem would be most appreciated.

What I would like from the CS StackExchange community:

I need help finding an algorithm to traverse the tree efficiently and collect all the data, preferably with as few big O operations as possible (i.e. lowest number of traversals and post processing). The data I'm pulling from can range from tens of possible data combinations to hundreds of millions.

What I have done so far:

I have developed an algorithm that does a depth first traversal of the tree and creates a list of paths through the tree with records of the type 1 node branches traversed by the path. I loop over the results, checking to see if the branches taken by the permutations of the paths conflict. I aggregate all these results into a set of valid path combinations. There are several loops due to different data types and tons of comparison operations to compare branches. This approach is effective for small n, but fails when my tree becomes sufficiently complex and/or large.

Why I am asking this question:

I wouldn't really begin to know how to describe this problem in order to search for similar answers. I'd also have to search across multiple communities.

1
How do multiple branches from one node occur with the Monte Carlo Tree Search?
37
What is the difference between radix trees and Patricia tries?
1
Can a node of Radix tree which represents a valid key have one child?
2
Tree traversal with conditional summing values from nodes
1
Space-efficient data structure for analytical querying of multiple branching evolutions of a dataset