How to do this effectively? Is there any algorithm to do this?

I have a simple idea, firstly, use the K-means algorithm to divide these red cells into K clusters, then for each cluster, find a bounding box(rectangle) to cover it. But the sum area of these rectangles may not be small. 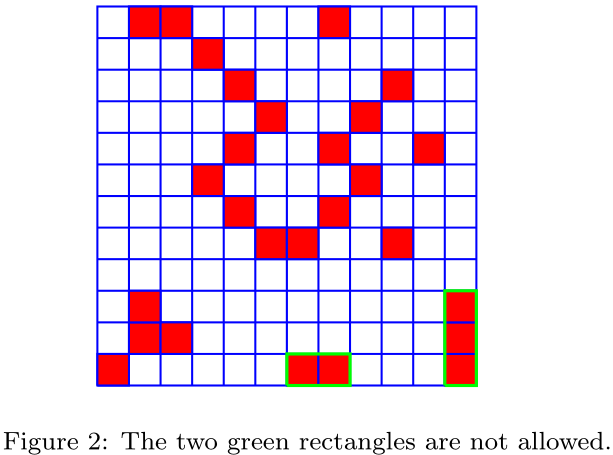 The way I created the pictures in my comment is by Integer Linear Programming, specifically the following model:

Where the decision variables x[i] refer to whether or not to use rectangle i, covers(i, j) is the set of rectangles that contain the cell (i, j), area is the vector of the areas of the rectangles, and the set of rectangles used is all 2x2, 2x3, 3x2 and 3x3 rectangles that fit on the grid and contain at least one red cell. You can use a slightly smaller set, for example it is never necessary to use a piece that's bigger than 2x2 that covers only 1 red cell, it could always be replaced by a 2x2 piece and give a better solution. Any rectangles of other legal sizes can be constructed from these pieces so they can be left out.

Experiment shows that presolving removes almost all columns (for relatively sparse problems), suggesting that it should be easy to a-priori not-generate many of them. I have not looked into that too deeply yet.

Despite ILP being NP-hard, large instances such as this or even this were solved in a couple of seconds. Maybe there is also an inherently efficient way though, I'm not sure.