JIT, AOT, Interpretation: What are differences between them?

I'm a beginner in Compilation. My understanding is that Interpretation means Interpreter takes source program as input and produce the result of this program.(source -> Interpreter -> run on the machine) Compilation means Compiler take source program as input and the front-end translate them into intermediate representation and then the back-end treats intermediate representation as input and produce machine code as output.(source -> front-end -> IR -> back-end -> machine code -> run on the machine) However, I'm confused when I learn Java and JVM. JIT seems more complicate than compilation what I understand. And I'm find some new terminologies like AOT. What differences between these terms?

The key distinction between interpreters and compilers (AOT or JIT) is this: 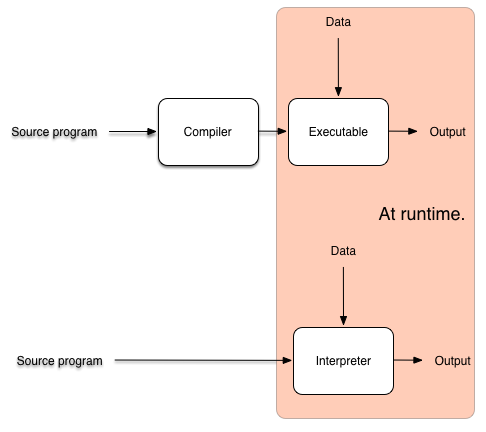 The advantage of compilers is that generated code is faster, because a lot of work has to be done only once (e.g. lexing, parsing, type-checking, optimisation), at compile-time, so is out of the way at runtime. And the results of this work are shared in every execution. The interpreter has to redo this work every time.

A problem of AOT compilers is that they often don't have enough information to perform aggressive optimisation. This information is only available at run-time.

A JIT compiler seeks to do better, more aggressive optimisation by executing only at run-time. However, a full compilation cycle is expensive (time-consuming), so shouldn't be carried out at run-time. How can we deal with this conundrum?

The key insight is that program execution time tends to follow the Pareto Principle: the great majority of a program’s execution time is (usually) spent running in a tiny fragment of the code. Such code is referred to as hot. Pareto’s principle tells us that (typically) a program contains some hot code. Think: innermost loops. With the information available at run-time, we can aggressively optimise such hot code, and get a massive speed-up. The rest is interpreted. Sluggishness of interpretation doesn’t matter, because it’s only a fraction of program execution time.

There is just one problem ... how do we find hot code? Remember, at compile time, the optimiser couldn’t work it out (reliably). How can we do better at run-time? Answer: Let’s use counters! We instrument the interpreter with counters, that increment every time a method is called, or every time we go round a loop. Whenever these counters reach a threshold, we assume that the associated code is hot. We compile that hot code, optimise it aggressively using information available at runtime. The jump to the compiled code, and execute it to completion. When the compiled code terminates, we go back to interpretation. In a picture: 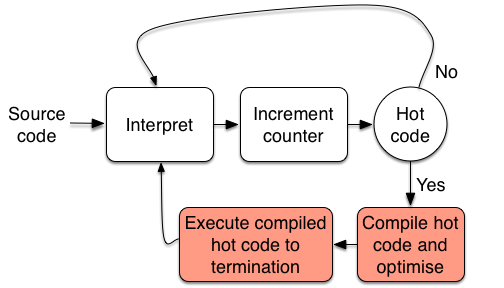 Note that the description above is a simplification, the details are more complicated.

Note also that there is no need for the first part of a JIT compiler to be interpreted. In principle, and AOT can emit code that is effectively a JIT-compiler, and the job of the interpreter (evaluation and profiling) is carried out by ahead-of-time compiled machine code.

1
Some questions regarding compilers and assemblers
5
Implementing a Compiler with Macros
5
The difference between compiler and interpreter
1
Automatic softcore configuration based on intermediate representation (IR) compiler output
3
Do "compiler" and "assembler" correspond to frontend and backend phases of a compiler?
1
Compilation with a witness / certificate
2
How is code executed in the computer
3
How does a compiler give an immediate compilation error?
20
Would it be wrong to say that the processor (and hardware) is the implementation of an interpreter for machine language?