In their paper "Coevolutionary Free Lunches" David Wolpert and William Macready describe a set of exceptions to the No Free Lunch theorems they proved in an earlier paper. The exceptions involve two-player games in which a player tries to minimize expected search cost given optimal play, or at least good play, by an opponent.

Free lunches are "allowed" in this case because the exact choice of cost function to minimize changes depending on which fitness (i.e. objective) functions previous rounds of play have "ruled out." In other words, given that an opponent already knows something about the game, and chooses responses that minimize the player's expected return, the player can eliminate certain fitness functions without having to evaluate them. To illustrate how this works, W&M provide this chart: 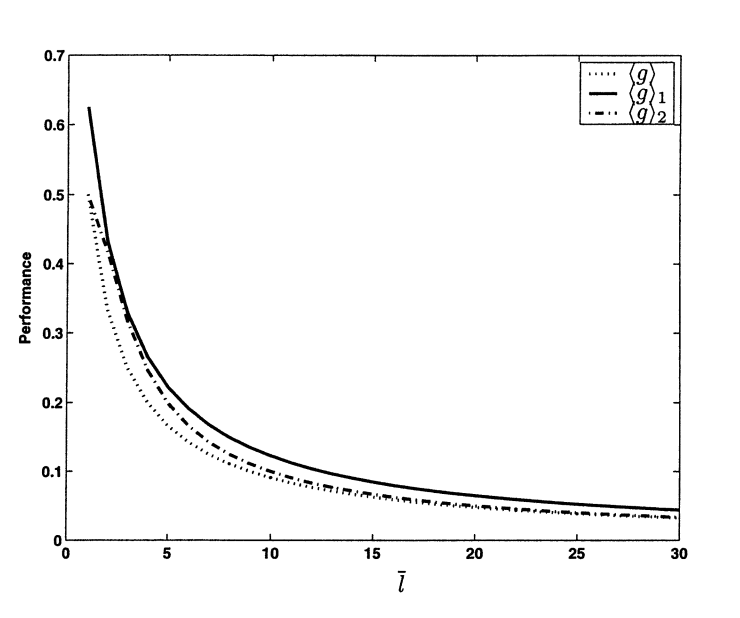 This illustrates the character of the free lunch provided: algorithms that take into account information provided by the opponent do better than algorithms that don't, and those that collect as much information as possible from the opponent do better than those that only collect some. W&M amplify this point in their later discussion of opponent intelligence. They show that even when an opponent is not omniscient, but has partial knowledge, the player can exploit its partial knowledge. In the case of total ignorance this won't work because the opponent always replies with a random move. In that case, there appears to be no gain:

the expected performance of the agent will be the average over the antagonist’s possible responses.

I guess this looks like $\langle g \rangle$ above. But in cases where the opponent has some knowledge, algorithm performance appears to increase monotonically with opponent intelligence.

What confuses me about all this is that the argument appears to boil down to the following trivial-seeming claim: across all problem domains, algorithms that bother to learn from knowledgable opponents do better than algorithms that do not. That is, as long as you don't turn down the free lunch, you can have it.

In effect, lunch is free because the opponent is buying.

If that's true, then couldn't we imagine a whole range of games in which, say, players play cooperative games with oracles, and those that refuse to cooperate perform worse on all problems? That's a free lunch in the same sense, right? But then we haven't explained where the oracle's knowledge comes from.

Does this mean that if we had to model the source of the other player's knowledge, we'd be back in the No Free Lunch zone? Or is the claim really that this sort of competitive play yields better outcomes even when both players start out in total ignorance, as the phrase "free lunch" seems to imply?

I can't offer an exhaustive account of all the kinds of coevolutionary free lunches, but I can offer two examples, the first of which is trivial, and the second of which I would argue is nontrivial. The second is nontrivial because it helps explain why the no free lunch theorem really must hold.

Imagine a very simple optimization problem in which the search landscape is a 7x7 grid of cells. The primary goal is to find the cell with the maximum value. 48 of the cells have a value of 0, and one randomly chosen cell on the grid has a value of 1.

Our secondary goal is to discover a search strategy that finds the maximum value more quickly. But it follows from the initial problem that no strategy could possibly beat random search here, because nothing can be learned from one cell about another. Nonetheless, the coevolutionary free lunch theorem holds! Here's why:

Suppose you have two optimization algorithms, A and B, both searching the grid. It doesn't really matter what strategy they use, but for concreteness, we'll stipulate that they both use a random search strategy. The only difference between them is that B pays attention to A's moves, and when it sees that A has found the maximum value, it jumps to that cell too. In some sense, when that happens, B has still "lost" the contest. But if you run a lot of competitions, and then compare the average performance of A to the average performance of B, you'll see that B finds the maximum value faster on average.

The explanation is simple. The average time to first discovery -- whether by A or B -- stays the same. But whenever A beats B to the win, B doesn't bother looking anywhere else. It skips ahead to the best cell. When B beats A to the win, on the other hand, A just continues searching, plodding along until it finds the maximum value on its own.

This looks like a win if you're only counting the number of moves B makes. If you look at the total number of moves that A and B make together, they actually do worse together than either would on its own, on average. That's because of A's obliviousness. If we change A to behave the same way as B, then they do about as well together as either would on its own -- but no better.

So here, modeling both algorithms together returns us directly to the no free lunch zone, just as the question argues. In effect, A and B are just performing random search algorithms in parallel. The final number of search operations remains the same.

Now imagine a very different scenario. Suppose we have a classification problem: recognizing sheep. Here, A's job is to look at a stream of pictures and say whether there are sheep in them. Simple enough.

But B's job is very different. B has the power to inject pictures of its own into the stream! Its goal is not to identify sheep; it just wants to slow A down.

How can B do this? There's a great blog post and associated Twitter thread about a closely related question by Janelle Shane. The Twitter thread begins:

Does anyone have a picture of sheep in a really unusual place? It's for pranking a neural net.

And here's one of the first replies:

How about an orange sheep? 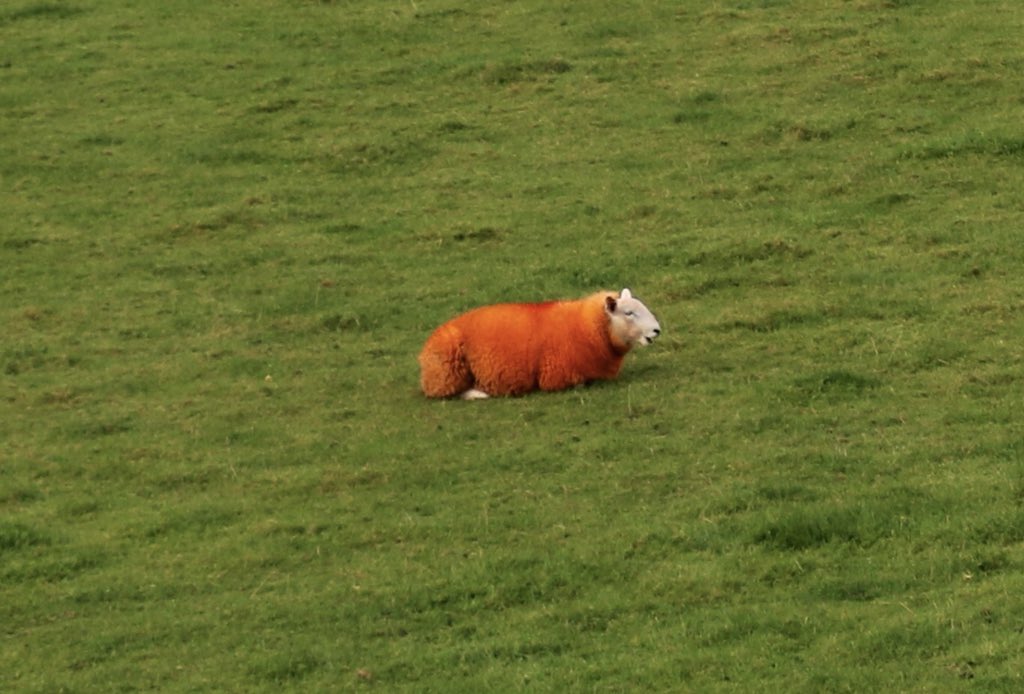 Turns out, this was perfect for pranking:

You totally got it. Orange sheep are not a thing it was expecting. "a brown cow laying on top of a lush green field"

Here are a couple of other examples from Shane's blog post: 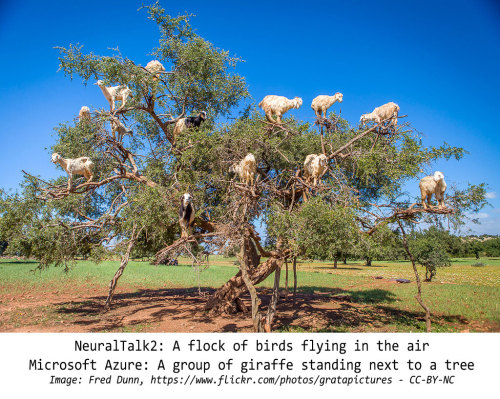 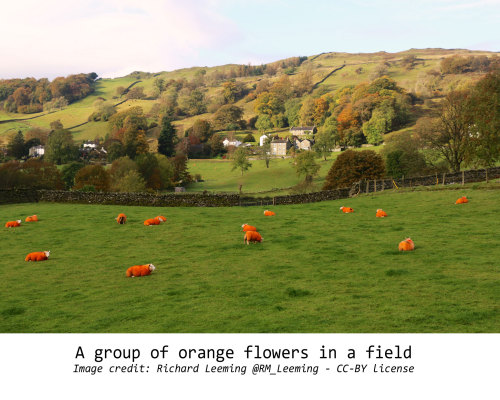 So what does this have to do with our problem? We can connect them by being more precise. Suppose A's goal is to reach greater than 99% accuracy, and B has the power to inject one picture into A's stream for every nine "natural" pictures. B looks for patterns in A's behavior and uses them to find pictures that mess with its model. This will keep A's accuracy below 99% for much longer than if A saw only "natural" pictures.

Two things follow from this. First, B will do much better if it pays attention to what A does. If B just picks images on the basis of some randomly chosen general principle like "sheep in odd places," then there's a good chance that A will be prepared for them already. If not, it will quickly learn to handle them correctly, and B will then have to adopt a new strategy. On the other hand, if B watches A's behavior, it can pick out the specific things that A is worst at, and focus on those. As soon as A improves at one of them, B can have another one ready to go. As long as B can find patterns in A's behavior, B will always present the most challenging images for A.

Second, A will do much better if it pays attention to which images B picks. After all, B is looking for patterns in A's behavior. If it finds patterns, then it will use those patterns to send fake or troublesome pictures to A. In turn, that means that there will be noticeable patterns driving B's choices. Here again, if A is paying attention to the patterns in B's behavior, it will more quickly be able to identify which pictures B is injecting.

So initially, this looks like a really compelling free lunch situation. But what have we actually shown? We've shown this:

As long as A is doing something other than random search, B can always find out-of-band samples that A's methods cannot handle.

That's the no free lunch theorem in a nutshell!

The only way A can prevent B from finding out-of-band images is by behaving in ways that look random to B. But if A's behavior isn't really random, then in the very long run, B will always be able to find the pattern -- even if B itself is only doing random search.

The very same argument works in the other direction. The only way B can prevent A from noticing patterns in its images is by behaving in random-seeming ways. But if B's behavior isn't really random, A will eventually find the pattern, even if it's only doing random search.

In this scenario, both algorithms will try to fool each other by adopting more and more complex, random-seeming behaviors. So in the very, very long run, they will slowly converge to a truly random search -- which is the best any algorithm can do on average across all problem domains.

An infinite pool of randomness

The line of reasoning for random behavior is similar. You could also connect these ideas to the proof that there are vastly more real numbers than integers. In the global scheme of things, the no free lunch theorem is true because the scope of randomness is unimaginably vast.

Not the answer you're looking for? Browse other questions tagged optimization machine-learning or ask your own question.

10
How do I classify my emulator input optimization problem, and with which algorithm should I approach it?
9
BFGS vs L-BFGS -- how different are they really?
3
Why can we not find the generally superior machine learning algorithm in practice?
3
Are the No Free Lunch theorems useful for anything?
1
Is Newton's algorithm really this much better than conjugate gradient descent?
1
Pandemic board game - find all possible next 4 actions
1
Method for combining derivative free optimization results of different data inputs