Generate random point inside a polyhedron

I would like to know if there are known algorithms for generating a random point(say following a probability distribution P) inside an arbitrary polyhedron(possibly non-convex and may contain holes)?

I find approaches for 2D case like the one described here but none in the case of polyhedrons(3D). Whether extending this approach for 2D is the only way, in which case that random point will still be forced to be on the surface of a triangle of a tetrahedron in the 3D triangulation of the given polyhedron?

algorithms computational-geometry
Share
Improve this question
edited May 23 '17 at 12:37

If you polytope is convex, this answer should work. Otherwise you can always do rejection sampling: Sample a point from the bounding box, check whether it's inside the polygon. That gets really slow for high dimensions and "unboxy" polytopes though, because the bounding box potentially has a huge volume compared to the region you're interested in.

To implement adrianN's rejection sampling method, you will need a function to determine if a point is inside your polyhedron. This not-completely-trivial problem is discussed in my book Computational Geometry in C, and there is code available. 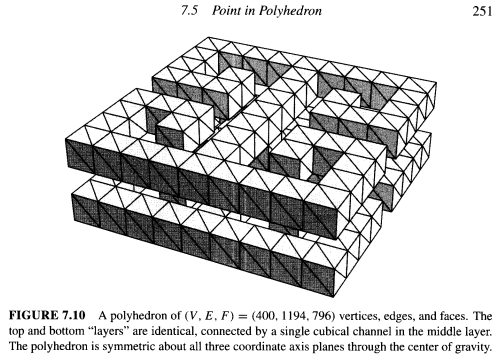 2
Point Location Problem in Polygon in Repetitive Mode for a Simple Polygon
21
Generating inputs for random-testing graph algorithms?
15
Testing whether a tetrahedron lies inside a Polyhedron
7
Constructing a random Hamiltonian Cycle (Secret Santa)
4
delaunay sweep circle initialization
4
An algorithm to find the area of intersection between a convex polygon and a 3D polyhedron?
0
Generate triangular surface mesh of convex hull spanned by 8 points in 3D-Space
0
Efficient algorithm to filter off points from a point cloud