What is the difference between following two finite automata?

I'm solving problem of drawing the finite automata of (1+0)*(10). Which is any string ends with 10. I've drawn the following diagram for this one:

But somewhere in solution it is given the following diagram: 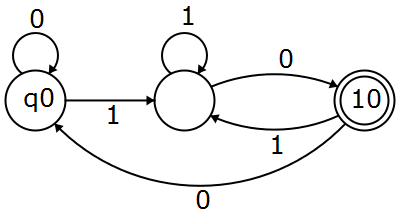 I can't understand what is the difference between these two? Is my solution is correct? If it is not than what changes in my solution will take me to this given solution?

As many have pointed out in the comments, your automata is non-deterministic. There are two paths you could take from q0 when you read a 1. When running a non-deterministic automata, you need to keep track of all possible paths and see if any of them end up in an accepting state. If you don't keep track of all different possible states you could be in, your solution might never accept any string, if it choses the looping 1 all the time, never leaving q0.

The main idea is that you build a table of all possible states you could be in. For your NFA, I'll label the nodes q0, q1 and q2 from left to right, starting at q0.

That's the first step. Now we have multiple states at the same time. We already did q0 so we have the (q0 or q1) state left.

Those are all our possible state transitions in the NFA.

Our list of states used in the transitions above are:

You can see that this is the bottom graph in your question, with the states renamed.

It's worth noting that in real life regex engines, NFA's are used because this conversion is very expensive for large automata. It's cheaper and safer to keep track of all states instead of doing the conversion. One notable example is the RE2 library. Most other implementations use backtracking, which is O(2^n) for an n-length string. RE2 is exponential in the expression length, but linear in input. Developers write the expressions, attackers write the input.

The difference is that yours is a Nondeterministic finite automaton, given a symbol $1$ of the string you can either stay in state $q_0$ or go to state $q_1$, but how do you decide which one? (remember that both DFA's and NFA's have no memory!).

That's when you have a non determinism, you keep consuming symbols of the string, at some point you make a guess "Well I'm in the last two symbols of my given string, lemme see if I can reach the end State", if it ends with $10$, then you'll go to $q_1 \rightarrow q_2$, otherwise you'll remain in $q_0$.

As the name suggest, Non-deterministic, NFA may have more than one transition from a state for a single input symbol. That is, in your first diagram On seeing input symbol 1 at q0 state, the machine can remain in q0 itself or it can go to next state. But in DFA, for every state you need to define EXACTLY ONE transition for each input set.

Now, an answer to your doubt is the second diagram is more appropriate. Why..??!! Because every language has many finite automata. That is for language (1+0)* 10 , I can draw many NFAs and Many DFAs.

But every regular language has unique minimal DFA and that minimal DFA should be your answer for such type of question.

Note that, you can first draw NFA and convert it to equivalent DFA. But it is not the only way. By practice, you can directly draw the DFA for the given regular language.

15
Why NFA is called Non-deterministic?