I'm looking for an algorithm that, given a directed bipartite graph, builds another graph (possibly with additional vertices) that has fewer total edges but the same reachability patterns. In particular:

The input to the algorithm is a bipartite directed graph $G'=(V,E)$ with all edges directed from $L$ to $R$ (where $V=L\cup R$) and no repeated edges.

The output should be a directed graph $G'=(V',E')$ that satisfies the following conditions, and that minimizes $|E'|$:

In particular, the output of the algorithm should be the minimal-edge-count graph among the set of all graphs that satisfy the above conditions.

Roughly speaking: given a directed bipartite graph, we want to find another directed graph that's "reachability-equivalent" in some sense and that has the fewest number of edges possible.

Question: is there an efficient algorithm for this task?

Here is a picture of these 'reachability-equivalent' graphs to show that it is possible to achieve a non-trivial reduction in the number of edges: 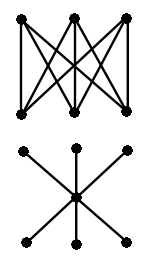 This is like finding a transitive reduction (or minimum equivalent graph) of a particular kind of dag, but where we're allowed to add additional vertices.

Browse other questions tagged algorithms graphs optimization or ask your own question.