I was studying operating system concepts from Silberschatz, Galvin and Gagne's book (sixth edition) and I have some questions about the flow of execution of a program. A figure explains the processing of the user program: 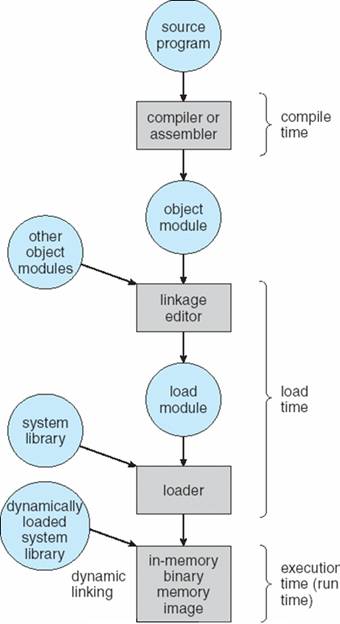 We get an executable binary file when we reach the linkage editor point. As the book says,

The program must be brought into memory and placed within a process for it to be executed.

I have several questions about this flow:

First of all, you are fundamentally confusing the purpose of RAM and hard disk. RAM is the only part of memory that CPU can access. Hard disk exists to expand the capacity of RAM as well as store the data permanently (data on RAM is transient).

That is why when creating small beginner programs, we can never save the state of programs. We create some variables while the process is running and modify them, but never explicitly store them on the hard disk (unless engaging with the file handling aspect). When we destroy the program all the memory is lost. and all the read, write operations of a language are merely wrappers around the system calls provided by the OS so as to make the code portable across several operating systems (since system calls of each are different). These read/write/open/close system calls are requests for OS to let us access a file on hard disk, different from the RAM.

As to your question about logical addresses, it is a little ambiguous as to what you want to say. Logical addresses are used in reference to RAM by programs, and usually refer to the program's view of its memory. For a program, its logical addresses may start from 0, but that doesn't translate into the fact that all programs start at physical address 0 of RAM! You are right that CPU has to process data, but it needs some data at all to process, with is stored in RAM. The addresses provided by program code are logical (say, get data stored in location '7 + start of program') and CPU has to calculate its actual physical address to work upon (i.e. replace 'start of program' with the base address of process code blocks in RAM).

Thus, logical addresses have nothing to do with hard disks.

Not the answer you're looking for? Browse other questions tagged compilers operating-systems memory-management virtual-memory or ask your own question.

8
Changing from Kernel mode to User mode (and vice versa)
4
How does the OS know the physical address of a process' first memory page?
2
Why do we need the valid-invalid bit in a page table?
0
what does the author mean by directory structure in operating system?
0
Understanding memory mapping conceptually
0
How are Operating systems involved in execution of programs?