Let's say that conditional branches are resolved at the 2nd-stage on a 4-stage pipeline. Why is there different penalties on a taken branch versus an untaken branch ? Should the penalty be the same for both? I always assumed that the not taken and taken branch penalty is 2 cycles but this is incorrect according to my friend. Could someone clarify this ?

Jump instructions in a 4-stage pipeline

Assuming that jumps can be resolved on the 2nd-stage (for a normal IF,ID,EX,WB) and that 1th-stage can always be done independently. This as a penalty will include 1 stall cycle. The main reason is simply because the pipeline fetches the next instruction following the jump(IF must update the PC , and the next sequential address is the only address known at this point). Now at the 2-stage when the jump resolves and realizes that the the fetch it issued was awrong address . The scenario will change,meaning that the pipeline will re-issue the fetch of the available instruction in the next cycle ( i + 1 ) causing one-cycle stall.

Here is a picture showing every scenario: 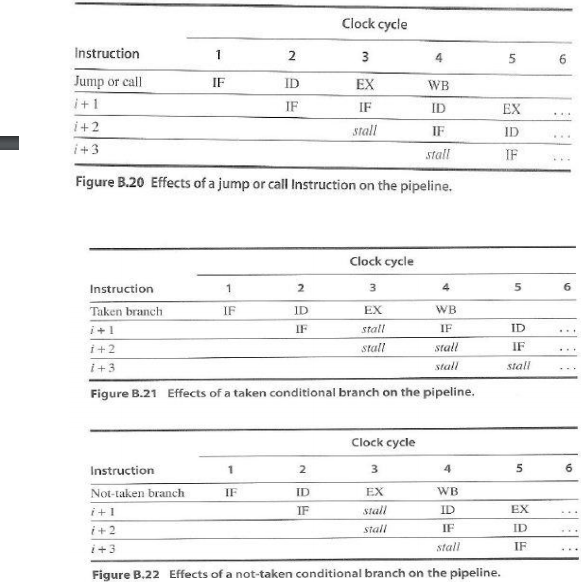 Not the answer you're looking for? Browse other questions tagged cpu-pipelines or ask your own question.