Here is a pictoral example of a simple input: 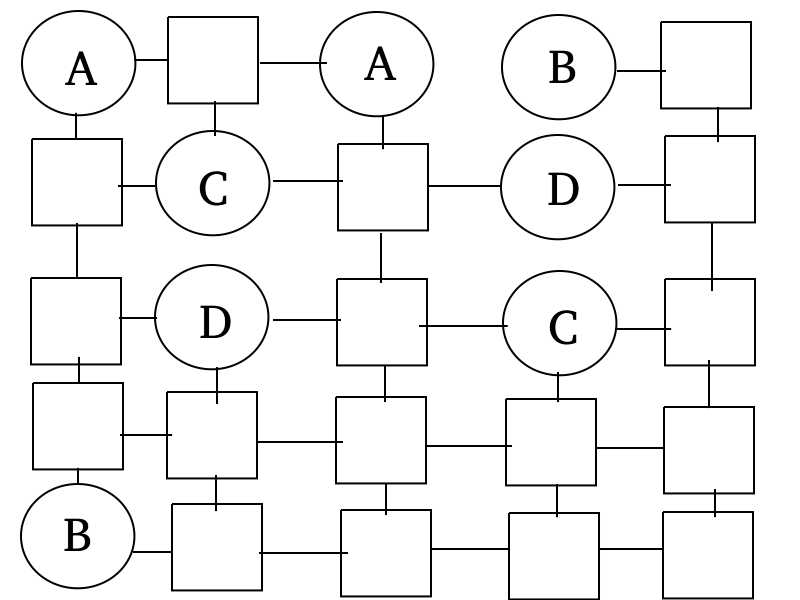 In this example, $n = 5$ and $k = 4$. Notice that on the top row of nodes, the "adjacent" A and B nodes are not really adjacent (they have no connecting edge). This is what I was trying to explain in my 4th point. Also notice the "marked" nodes I was referring to are circles and are labeled with letters, marking them.

Here is a pictoral representation of the solution to the example input: 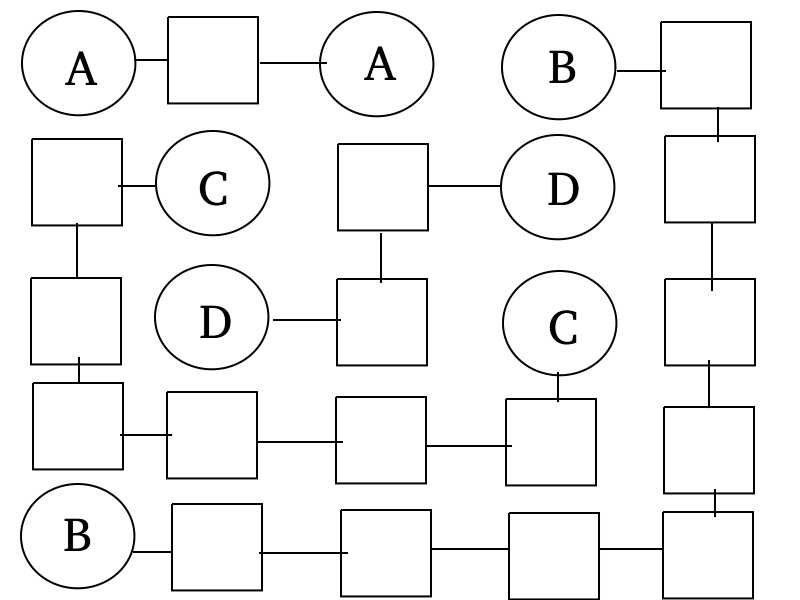 Ultimately, I am using backtrack to find the solution. However, instead of plain backtrack search, I reduce the input graph based on some rules I came up with:

For inputs where $n < 10$ and where $k$ is small enough (wrt to $n$) such that the marked nodes are not too sparse, the rules reduce the input into the solution, obviating the need for backtrack search. However, with larger/more sparse inputs, the rules barely seem to reduce the initial state, and then backtrack becomes necessary. Unfortunately, the search space seems to be too large to efficiently solve the problem.

If it is indeed the case that there is not much else to do in terms of problem reduction via rules, am I better off implementing a heuristic search (like best-first search) to solve this problem? And if so, does anyone have suggestions for formulating such a heuristic? Thanks!

So I attempted to use best-first search with a few different evaluation functions. I tried to use an A* type approach ($f(n) = g(n) + h(n)$) but this did not work very well, mainly because I could not find a good function to satisfy $h(n) \leq cost(n, goal)$. Instead I used the number of newly "owned" nodes that the state had after applying the aforementioned rules and subtracting the level of the state in the tree (ultimately, this was a function I wanted to maximize instead of minimize). This worked extremely well for many inputs that were not solved completely by the rules, but still larger inputs are not efficiently found.

I am trying to now find some kind of evaluation function that can measure the potential of a certain state to become more "reduced" by these rules, which will guide search towards the states whose descendants will more likely be the goal state.

In addition, I figured out another invariant property about the goal states: using the definition I gave, the goal state must have exactly $n^{2} - k$ edges (and as mentioned before, "labeled" nodes have degree of 1 and unlabeled degree of 2). Also, if the start state is redefined to include edges between all directly adjacent nodes (so including an edge between A and B nodes for example), then a start state always begins with exactly $2n(n-1)$ edges. With both of these in mind, the solution to each problem must result by removing exactly $n^{2} - 2n + k$ edges from the graph.

Given these extra properties, is there a way to determine a specific set of moves to solve the problem, or at least some kind of evaluation function that will help guide a search towards "better" states?

As it turns out, this puzzle was solved in a competition at Oxford University in 2012. The winning implementation used backtrack search with several heuristics and pruning, and it can solve instances of the puzzle much larger than the maximum 14x14 in milliseconds. Apparently, the problem I was trying to solve is equivalent to another game called Numberlink. For anyone else interested, here is the GitHub page for the implementation, which further explains the heuristics used to solve the problem.

In case the link breaks, I will post a quote from the readme:

A dual representation based on link corners

There are multiple ways to do backtracking on numberlink puzzles. The most obvious is to start at a source, choose a link to its other end and recurse. Alternatively one can start at all sources at the same time, or you can ignore the sources and systematically fill out the squares on the paper in some order.

Numberlink uses the later approach: It fills out the paper starting in the upper left corner and continuing along the SW-diagonals. For a 4x4 paper the order in which squares are visited is (in base 16):

Backtracking in this systematic give us a lot of advantages compared to starting at the sources:

We never get unconnected squares. We simply always connect a square as we go over it. We never block a source from its other end. To see this notice that blocking a source requires us to have passed it. In passing it we must have connected it to a partial link. The other end of this partial link can not be connected to any other sources or to the side, so it must be in the 'active diagonal'. We always know exactly what squares around us have already been connected. That's the one above us and the one to the left. The directions we need to care about is down and right.

0
Termination of Moore's algorithm to minimize deterministic automata
2
Finding any path between nodes of implicit, finite, regular, undirected graph
2
Given all pairs shortest paths matrix, find graph with minimum total sum of edges
2
Existence of walk in undirected connected graph where nodes must end with assigned value
1
Subset of nodes such that all nodes of a graph are adjacent
2
Graph Layout Algorithm that optimizes only `x` (not `y`) of nodes?