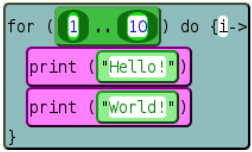 3
If someone was designing a computer language, why would they require static members to be defined outside the class?
5
Why isn't the Swift programming language type inference more aggressive?
4
Why translating a program from one high-level programming language directly into another is difficult?
8
What was the first programming language with loop break?
1
How to generate (Java) source code in academically acceptable way - using abstract syntax tree?
1
Why are the control statements[if-else, while, for] commonly used in programming?
3
Why is the address-of operator in C/C++ represented with the "&" symbol?