Is type inference done by an interpreter static or dynamic?

This question is an example that motivated my question Does "static" or "dynamic" imply a compiler or interpreter implementation of a programming language? at a more general level.

Typically , type inference in interpreted languages happens after parsing (because type inference works on ASTs) but before interpretation (= execution). Both compilers and interpreters have a phase distinction between type inference, and the execution. The former happens strictly before the latter. 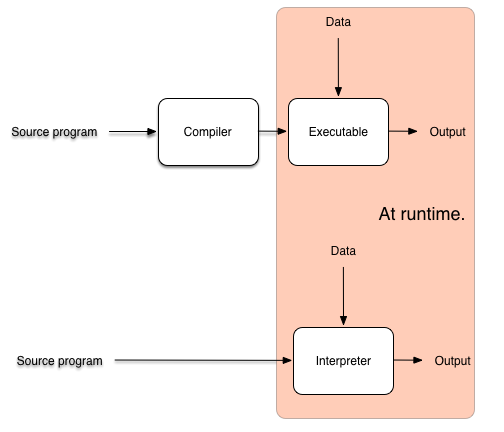 Not the answer you're looking for? Browse other questions tagged typing or ask your own question.

4
Does “static” or “dynamic” imply a compiler or interpreter implementation of a programming language?

3
Is the type inference here really complicated?
7
Inheritance, and dynamic access to members/attributes and methods in Java-like languages
2
How is the following ML Curry expression evaluated
1
How is a type system related to a progam?
5
Is dependency analysis required in order to type a program?
0
Why are types and grammar non-terminals so distinct?
2
Confusion about data types, compilers, hardware data representation and static vs dynamic typing
0
How does a language abstract away from underlying byte machines?