Minimize number of circles to cover set of points

I'd like to minimize the number of circles $C$ to cover a set of points $P$ in 2D.

There is no fixed radius however each circle must contain exactly $N$ points. The circles may overlap. A point may be covered by multiple circles. All coordinates are floats. 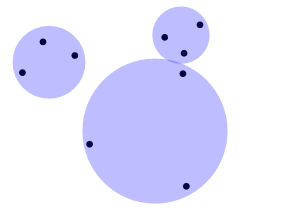 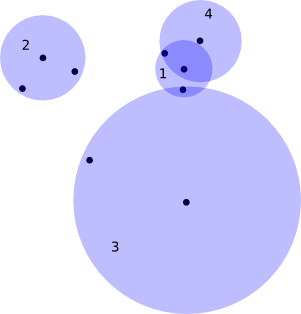 I'm aware the problem might be a bit vague. Any hint on how to approach the problem is appreciated. I'm not necessarily interested in an optimal solution. An approximate/heuristic algorithm is totally fine.

If you restrict the possible center points of the circles to be the set of points, then this is an instance of set cover where the universe has $|P| \le 1000$ elements and where each set contains $N$ elements. While set cover is NP-hard, there are algorithms for set cover that are faster than exhaustive search.

Your approach is known as the greedy algorithm for set cover. It is known to give a $\lg N$-factor approximation, i.e., a covering that uses no more than $\lg N$ times as many circles as the optimal covering. Thus, the ILP formulation may yield better solutions. There are also heuristics for improving the greedy algorithm, e.g., BubbleSearch, which makes small random tweaks to the order suggested by the greedy strategy, repeats that some number of times, and takes the best solution found so far. You could try them and compare them to how well the ILP formulation works, if you wish.

You could also look at algorithms for geometric set cover; some of those techniques may be useful here. In particular, there are approximation algorithms and fast heuristics for geometric set cover, and you could try seeing if they are useful in your particular setting. They use the extra geometric structure provided by the problem: this is not a totally arbitrary instance of set cover, but there is some additional structure.

Fortunately, it's possible to fix this limitation. It's possible to come up with a not-too-large set $U$ of candidate circles, such that the optimal solution is obtained by taking a subset of circles from $U$; then we can apply set-cover techniques to pick a minimal-size subset of $U$ that covers all of $P$. In particular, we will use the following geometric facts:

Lemma 1. Let $C_0$ be any circle that covers exactly $N$ points. Let $S \subset P$ be the set of $N$ points covered by $C_0$. Then there exists a circle $C$ that (i) covers exactly $S$ and no other points and either (ii.1) has at least three points of $S$ along its circumference or (ii.2) has two points of $S$ along its circumference and is centered at their midpoint.

Proof. Consider any circle that covers exactly $S$ (and nothing more). Pick the point $p \in S$ that is closest to the boundary of this circle. Reduce the radius of the circle until $p$ is on the boundary. Now if this circle doesn't have two points of $S$ along its circumference yet, move the center of the circle towards $p$, reducing the radius at the same rate, until the first time some other point is on the boundary -- call it $q$. At this point we have a circle $C$ that covers all of $S$, contains $p,q$ on its boundary, and doesn't cover any points other than $S$. Now let $m$ be the midpoint between $p,q$, and let $L$ be the line that is perpendicular to $pq$ and that intersects $m$. If $C$ is centered at $m$, we're done. Otherwise, $C$'s center is somewhere on $L$. Move the center of $C$ along $L$ towards $m$, decreasing its radius at the same time so that $p,q$ remain on its circumference, until either the center reaches $m$ or the circumference hits a third point. Either way, we are done. $\Box$

Lemma 2. Given any three non-colinear points $p,q,r$, there is a unique circle that is tangent to all three (i.e., has all three on its circumference). This circle can be efficiently computed.

Proof. Use the same procedure described in the proof of Lemma 1, but now without worrying about how many points are covered by the circle. $\Box$

Lemma 3. Given any two points $p,q$, there is a unique circle centered at their midpoint and tangent to both $p,q$.

With these lemmas, we can now suggest an algorithm:

Given a set $P$ of points and a set $U$ of circles (each covering exactly $N$ points from $P$), find the smallest subset of $U$ that covers all of $P$.

This is a finite set cover problem, and the solution to this set-cover problem is guaranteed to be optimal. We obtain a set-cover instance with a universe of size $|P| \le 1000$ and with $|U|$ sets, each of size $N$. This set cover problem can then be solved using standard algorithms for set cover, e.g., using an ILP solver. We'll have $|U| \le |P|^3/6$ at worst, though in practice I expect $|U|$ will typically be much smaller (closer to $|P|^2$ or so). The running time to create the set-cover instance will be at most $O(|P|^3)$; then we have to solve the set-cover instance. I anticipate that, for these parameters, it might be possible to obtain an optimal or very-nearly-optimal solution to the original problem using off-the-shelf ILP solvers.

My thanks to @j_random_hacker for substantial assistance with this answer.

2
Deploying circles on 2D space to cover most of points

19
Maximum Enclosing Circle of a Given Radius
1
Maximum non-intersecting subset of circles
4
Encircling randomly distributed points
3
Given a list of points on a sphere find the place for another point such that most space is covered?
2
Cover $n$ points in the plane with $k$ circles of radius $1$
1
Placing small circles randomly inside a larger circle, where no two small circles intersect
0
Minimum square side length to enclose n circles of radius r
5
Intersection of O(n) expanding circles with line from the origin
11
Minimum circles to cover a set of points and avoid another set of points