What is the time complexity of calling successor $n$ times during tree traversal?

What resolves the apparent contradiction between:

If I call the sucessor function once, the time complexity is $O(h)$, which could be $O(n)$ or $O(\log n)$, depending on the kind of tree.

If I call the successor $n$ times, the time complexity is $O(n)$ in a balanced tree.

Gist: The time complexity of calling the sucessor function multiple times is not merely the product of the number of calls and the worst-case bound, though that product does encompass the worst case. Rather, if the function going to be called from every node, a more sophisticated analysis can establish a tighter worst-case bound for specific trees and implementations of the successor function.

At best, tree traversal takes at $O(n)$ time: $n-1$ calls are made to the successor function, which takes constant time. One simple example of this is the traversal of a linked list, which has a successor function that immediately returns a pointer to the next node with no additional computation.

The worst "reasonable" tree traversal would take $O(n^2)$ time: $n-1$ calls are made to the successor function, which searches all $n$ nodes before determining the successor. For example, if we have an unsorted tree and the successor is defined to be the next largest element (rather than based on its position in the tree). Of course, we could sort the tree first in time $O(n\log n)$ and in general, if we expect to call the successor function $n$ times, it would be wise to preprocess the tree so that it can be traversed in one of the three canonical ways: inorder, preorder, or postorder.

Ok, time to clear a misconception! Let's ask what's the best-case and worst-case scenarios for the successor function are when we have an inorder traversal of a binary search tree: 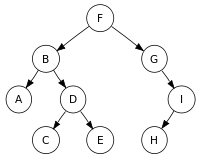 Remember that in inorder traversal, the left subtree is visited, then the parent node, then the right subtree. So an inorder traversal on the above tree gives us $[A,B,C,D,E,F,G,H,I]$. (For contrast, preorder traversal would have given us $[F,B,A,D,C,E,G,I,H]$). We start at the beginning of the tree at $A$. From $A$, the successor function checks to see that it has no right subtree (it doesn't) before finding its closest ancestor for which it is the descendant of the left child. But wait! I didn't tell you that each node had knowledge of its ancestors, so we potentially have to search the entire tree just to determine where $A$ is! So now we split into two cases:

Another way to appreciate that the average call to successor is $<\log(n)$ is to consider a balanced tree with $n$ nodes and roughly $n/2$ leaves. Half of all successor function calls will be to an ancestor, half of which are from the left child ($\frac{1}{4}n$) and thus takes only one generation/step, $\frac{1}{8}n$ go back two generations, $\frac{1}{16}n$ go back three. Hopefully you see the pattern: $\sum_{i=1}\frac{i}{2^{i+1}}$ converges to $1$. And the other half does the step-analogous $\min$ function (searching it's right subtree for the leftest child), so it also converges to $1$. The expected time is thus $2$ (if I've done my math carefully). So that's $n-1$ calls to a successor function that on average takes ~$2$ steps $\rightarrow O(n)$ time.

Not the answer you're looking for? Browse other questions tagged binary-trees search-trees or ask your own question.

3
Finding no. of leaf nodes for each node in a BST
2
Prove that inserting $n$ sorted values in to an AVL using AVL insertion is $\Theta\left (n \log \left ( n \right ) \right )$
12
Time Complexity proof for Segment Tree implementation of the ranged sum problem
6
Balanced Binary Search Tree Two-Sum with Constraints
0
The height of 5-balnced tree is O(logn)
0
Time complexity of creating the unique binary tree from given inorder and preorder (or postorder) traversal sequences
2
Proving Postorder Traversal's Time Complexity
1
Complexity of “Subtree of Another Tree”