There is no real agreement what characterises denotational semantics (see also this article), except that it must be compositional. That means that if $\newcommand{\SEMB}[1]{\lbrack\!\lbrack #1 \rbrack\!\rbrack} \SEMB{\cdot}$ is the semantic function, mapping programs to their meaning, something like the following must be the case for all $n$-ary program constructors $f$ and all programs $M_1$, ..., $M_n$ (implicitly assuming well-typedness):

Here $trans(f)$ is the constructor corresponding to $f$ in the semantic domain. Compositionality is similar to the concept of homomorphism in algebra.

Part of the problem was that the notion of equality of programs was not as well-understood as it is now. I'd argue that both problems have been ameliorated to a substantial degree, (1) for example by bisimilation based techniques coming from process theory (which can be seen as a specific form of operational semantics) or e.g Pitts work on operational semantics and program equivalence, and (2) by the developments of e.g. separation logic or Hoare logics derived as typed versions of Hennessy-Milner logics via programming language embeddings in typed π-calculi. Note that program logics (= axiomatic semantics) are compositional, too. 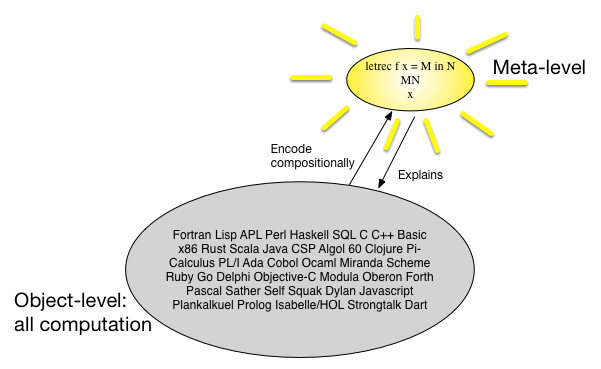 What is the advantage of this approach? Maybe it makes sense to look at it from an economic POV. If we want to prove something interesting about a class of object program we have two options.

5
Notation for operational semantics that can be used in code comments
4
How does one deduce small step operational semantics?
1
Rule induction principles in Harper's PFPL
3
What is the significance of ⟨B, s⟩ -> ⟨B', s'⟩ as the initial rule in this question about small-step semantics?
8
What was the major breakthrough between Hoare-Floyd logic and Scott–Strachey semantics?
7
Formal model of execution for Java (or general imperative language)
8
What's the difference between: operational, denotational and axiomatic semantics?