Simplification of regular expression and conversion into finite automata

This is a beginners question. I and reading the book "Introduction to Computer Theory" by Daniel Cohen. But I end up with confusion regarding simplification of regular expressions and finite automata. I want to create an FA for the regular expression

My first question is that how we can simplify this expression? Can we we write the middle part as $(ab+ba)(ab+ba)^*$? will this simplify the expression?

My second question is whether the automaton given below is equivalent to this regular expression? If not, what is the mistake?

This is not a homework but i want to learn this basic example. And please bear me as a beginner.

At the point of writing, your NFA is still a bit off. One version of a correct answer looks like this: 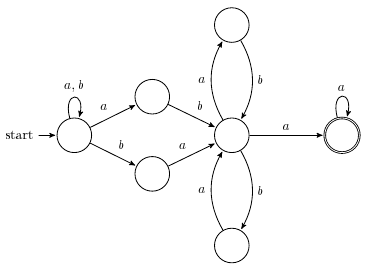 The key thing to practice when doing things this way is breaking the RE down into a sequence of smaller REs, that you then stick together. This is essentially a 'casual' version of the systematic method.

The systematic way is simple, but a bit fiddly. It's a relatively long explanation as to how to do it systematically, and as you haven't reached that bit in your reading yet, I'll refrain from working through the details here, however just as a quick reference, this explanation is pretty thorough and reasonably well explained.

Not the answer you're looking for? Browse other questions tagged formal-languages automata finite-automata regular-expressions or ask your own question.