NP with a parallelism model?

Can we think of NP using a parallelism model instead of using a "checking relation" without loss of generality?

From what I understand from the problem statement given by Stephen Cook,

The notation NP stands for “nondeterministic polynomial time”, since originally NP was defined in terms of nondeterministic machines (that is, machines that have more than one possible move from a given configuration). However, now it is customary to give an equivalent definition using the notion of a checking relation, which is simply a binary relation R ⊆ Σ ∗ × Σ ∗ 1 for some finite alphabets Σ and Σ1. We associate with each such relation R a language LR over Σ ∪ Σ1 ∪ {#} defined by LR = {w#y | R(w, y)} where the symbol # is not in Σ. We say that R is polynomial-time iff LR ∈ P. Now we define the class NP of languages by the condition that a language L over Σ is in NP iff there is k ∈ N and a polynomial-time checking relation R such that for all w ∈ Σ ∗ ,w ∈ L ⇐⇒ ∃y(|y| ≤ |w| k and R(w, y)), where |w| and |y| denote the lengths of w and y, respectively.

This mentions the notion of a computation tree: 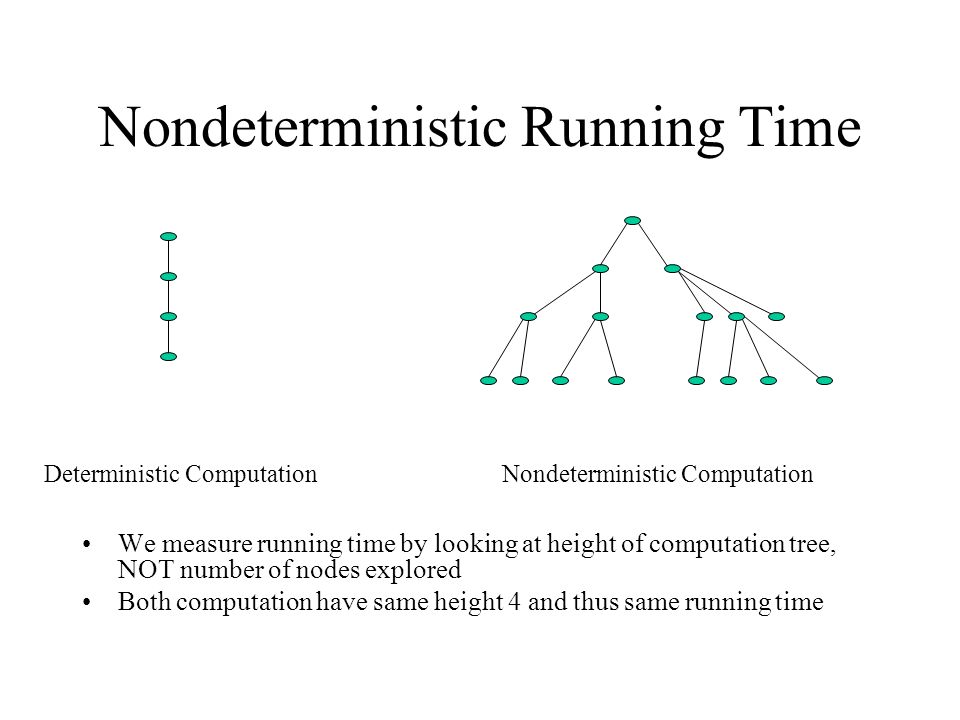 Thus, suppose I were to have a machine that was able to compute all of the non-deterministic branches in parallel such that the bounded running time is $O(poly(n))$. Is this an equivalent of a Turing machine such that a language that is accepted by this machine is within $NP$?

In a sense, we can also see that if a deterministic machine were to choose the "right" branch by chance that it's somewhat equivalent to the notion of an oracle. This seems like it's similar to the "checking relation" in the sense that we need only compute one branch's result in order to determine acceptance of the answer or rejection. Is this intuition right?

Edit: If we make the addition that one of the paths are guaranteed to accept, then is the machine now equivalent to NP?

Not the answer you're looking for? Browse other questions tagged complexity-theory time-complexity computation-models np parallel-computing or ask your own question.