I am looking for a necessary or/and sufficient conditions to allow planar drawings with no edges "going around" sets of vertices. These are drawings satisfying: 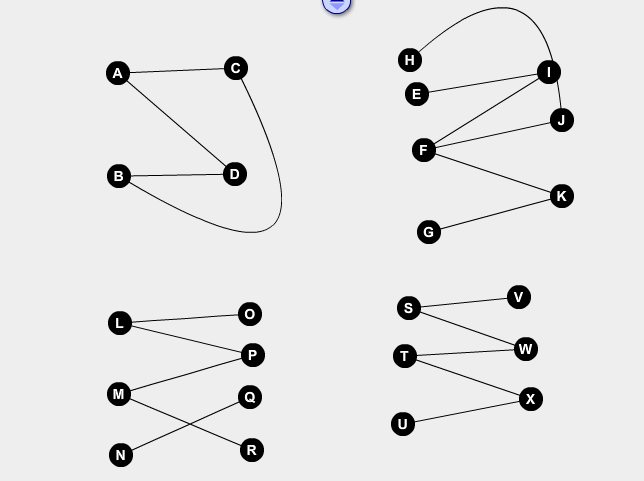 The top two graphs are the only obstructions I could find. My questions are:

Note that this is not the same as being outer-planar, $K_{2, 2}$ is outer-planar (can be drawn as a square) but it cannot be drawn to satisfy the conditions I mention above.

Your graphs are exactly the graphs of path-width $1$ or, equivalently, the forests each of whose components is a caterpillar. Caterpillars have two relevant characterizations:

Lemma 1. Every caterpillar is in your class.

Lemma 2. Every graph $G$ in your class is acyclic.

Lemma 3. Every connected non-caterpillar is not in your class.

Theorem. Your class of graphs is exactly the class of forests each of whose components is a caterpillar.

Proof. These are the obstructions for path-width $1$. $\Box$

These are essentially the obstructions you found: you need $K_3$ rather than $K_4$ because the latter would admit $K_3$ into the class; the subdivision of $K_{1,3}$ is exactly your second obstruction.

So, the following answer is what I came up with:

As you already mentioned, there are only two possible cases which cannot be rearranged.

Edit: I misread the graph, sorry for that.

To prove that any other subgraph is valid, you can imagine the following:

First, we assume that we have no edges and start with an arbitrary edge $e$. By adding the next edge, we have three possible cases:

The first case is that we have a node which neither starts nor ends at the same node as the first edge. This leaves us without any problem and we can continue inserting.

The second case is that we have a edge which - on its way - crosses another, already existing, edge. In this case we have to swap the vertex $V_1$ or $V_2$ (the one with the already existing edge) with one of the new edges $V_3$ or $V_4$, such that we continue fulfilling the criteria.

This assumes that we have no further edges starting or ending at the nodes to swap, which leads us to the following third case: After swapping one of the four Vertices $V1-V4$, we need to trace all other connections from the swapped Vertex.

Once again we can find only three solutions: Either we trace a ending connection, or repeat the step that we already took before (tracing all remaining steps). If we end up on an ending node, we can swap all of the traced nodes.

The last possible case will lead to a node which we already visited, which would leave us with a complete subgraph, which we can then reduce to the mentioned $K_{2,2}$ condition.

EDIT: To extend this proof to the second case, we have to look at the following conditions:

In general, if we have a subgraph with at least one hub (3 or more connections), it is "rather easy".

We cannot rearrange if we have the displayed case with more than two neighbors of higher degree than one ($\langle k\rangle > 1$). This is important because it provides is with the knowledge about further neighbors. We don't even have to trace them any further to avoid any circles (like the first case), but it is enought to check the immediate neighbors.

Since I myself have only slight knowledge in this area, but still want to provide you with a possible solution, I linked you one (hopefully) appropriate article

If anyone would name this problem, I'd be interested to learn, especially since I came up with this solution only by following up on thoughts from Fáry's theorem and complete bipartite subgraphs.

Not the answer you're looking for? Browse other questions tagged graphs terminology graph-drawing or ask your own question.