I'm taking online compilers course. It's long ended, so it wouldn't be cheating to ask a question on quiz here.

For any given $n$, what is the smallest number of states needed for a DFA that recognizes $L_n$?

I know regexes a bit and I can't think of a way of expressing this with regular expression. But I thought even if it's possible it should involve some kind of backreference, and isn't backtracking impossible with DFA?

So the quiz gives the correct answer $3n + 1$ and explain it like so.

We need states to count how many 0 we meet and how many 1 we meet, so we need 3*n+1 states including the start state.

And this explanation doesn't explain anything to me. I mean okay the $+1$ part obvious, but why is there $3n$? I mean I agree that we probably need states to count how many 0 and 1 we meet, but exactly how we're gonna do it? If anything we should have 4 states in my opinion. One recognize 0, one to recognize 1 and another two states to count the numbers of them.

Right now I'm reading articles and papers about NFA, DFA, regular expressions and backreference, but maybe the answer is much simpler?

EDIT1. Okay, I've tried my best and constructed kind of obvious DFA for this task.

Okay, I think I finally got this. The main problem I think was that I haven't tried to actually draw automaton initially and If I would it would be much easier. So once I've noticed that it could be changed into this

And this would give $3n+1$ obviously.

The explanation just gives some intuition. For a proof, you can use the Myhill-Nerode theorem for a lower bound, and a construction (a DFA for the language) for an upper bound.

In this particular case, the pumping lemma also shows a lower bound of $3n+1$ (once you realize that the pumping constant is the size of the minimal DFA). More generally, if $L$ is a finite language and the largest word in $L$ has length $m$, then the pumping lemma (or the Myhill–Nerode theorem) shows that any DFA for $L$ needs to have at least $m+1$ states. 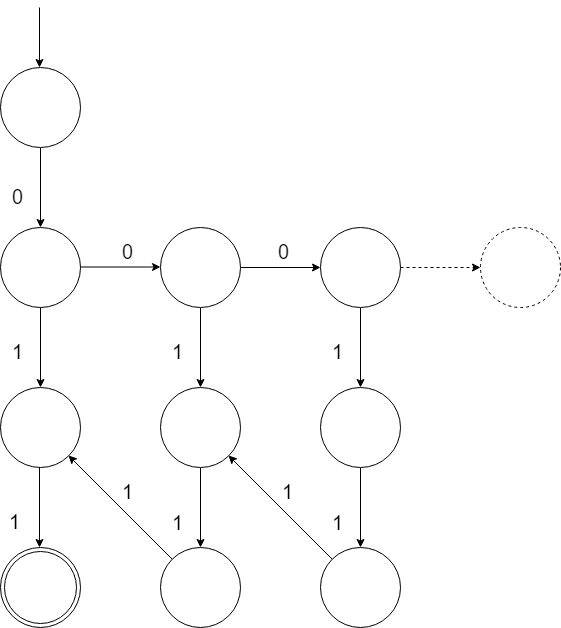 As shown above, the DFA could be constructed like that. Every encountering an addition to the continuous 0 sequences, first traverse the additive 1's transition state, then reuse the previous path which is equally a counter to 0's number.

For the proof to the bound, It is deduced from the path the transition experiences.

To put it ahead, the DFA may not contains a self-cycle, for that the number of 0 or 1 is presumed to be restored. If there exists a self-cycle, it will not be able to figure out how many 0 or 1 there appears. Followed is the detailed proof of 3n + 1 lower bound.

First, for every single digit, it implies a directed path and a state transition. So as the longest number digits in the language, it has 3n digits. Plus the start state, there must be at least 3n + 1 state to traverse. So this gives the lower bound to the DFA. And the picture above shows one of the construction.

1
DFA for exactly two of a and one or more of b
1
Designing a DFA for binary strings having 1 as the fourth character from the end
0
Modify DFA/NFA that accepts Language Subset with only Palindromes (with Size Limit)?
5
DFA, lower bound on number of states, language with primes and remainders
2
Use of Myhill-Nerode Theorem to prove minimal number of states
1
Algorithm for printing all accepted strings (to an upper bound if infinite amount) from a given DFA
3
NP completeness of deciding whether a set of examples, consisting of strings and states, has a corresponding DFA?