I know how a Turing machine works, how it accepts a language but in some.

In some scenarios we would like to use counters. For example, I want to develop a machine that accepts $\{0^{2n} : n \geq 0\}$. How can I count the number of zeroes?

If some one of you could solve the following problem for me it would help my understanding of these matters:

I know this question has quite a few months already, but I'd like to share here the Turing Machine for $\{0^{2^n} : n \geq 0\}$ found in Michael Sipser's Introduction to the Theory of Computation, 3rd edition (Example 3.7).

The idea behind this machine is as follows, everything after this line is a direct quote of the book: 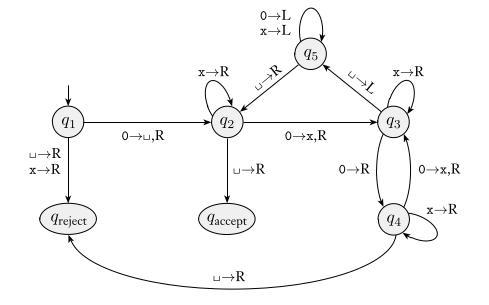 First, scan to the end of the input, and write $\#0$ to the tape after the last character. The string of zeroes and ones after the $\#$ will be a binary counter.

Second, convince yourself that a Turing machine can add one to a number in binary.

Third, peform the following until you run out of input. Scan back to the first $1$ on the tape, replace it with a $\#$, scan back to the counter and add one to it.

Finally, when you've run out of input, check that the value of the counter is a number of the required type. For example, it has the value $2^k$ for some $k$ precisely if it matches the regular expression $10^*$. For $3^k$, you can either convince yourself that Turing machines can divide a binary number by $3$ or – easier! – keep your counter in ternary instead of binary.