I'm familiar with applying the sutherland hodgeman algorithm for convex polygons(and even concave polygons with a slight modification) against convex clipping windows.

However, if I am to modify the sutherland hodgeman algorithm in such a way that I can clip a concave polygon against a concave window, is that possible?

My question is precisely this: 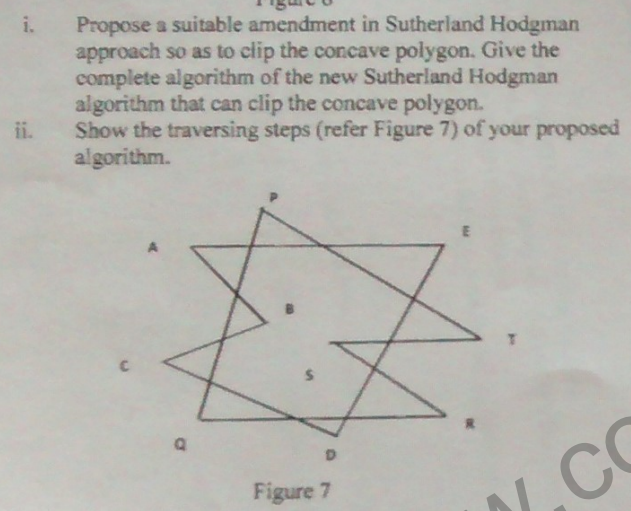 It's a question that has come in my exam and the only thing I thought of was using the Weiler Atherton algorithm, but that's no amendment to the Sutherland Hodgman approach and is a different algorithm altogether.

Browse other questions tagged algorithms graphics polygons or ask your own question.

5
Turning a simple polygon with holes into exterior-bounded only
3
How does the Sutherland-Hodgman Algorithm work?
4
Is there an efficient algorithm to extract the farthest ends of a thin contour?
4
An algorithm to find the area of intersection between a convex polygon and a 3D polyhedron?
2
Minimum distance between two convex hulls maximized
0
Minimum Bounding Quadrilateral
1
Efficient rasterisation of vector image with polygons