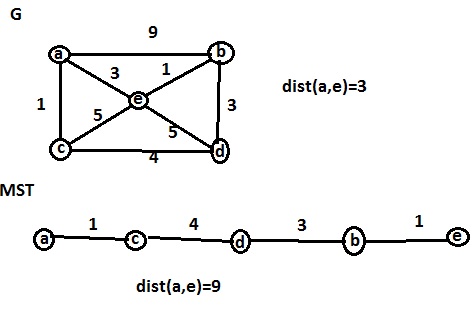 Is it correct to write,

It is impossible to prove a theorem if you don't understand its statement.

Here is what you are asked to do. Given a weighted graph $G$, we will use the following notation:

It seems that you are not familiar with the notation $\Omega(\cdot)$. It is the counterpart of big O, and described in the answers to this question.

Unpacking the big $\Omega$ notation, we can rephrase the question:

The question is somewhat ambiguous – it's not clear if you need to provide an example for every $n$ or just for infinitely many $n$. I assumed the latter, but in fact in your case there is a sequence $G_i$ with $n(G_i) = i$, so you can try proving this stronger statement instead.

Not the answer you're looking for? Browse other questions tagged graphs spanning-trees or ask your own question.

93
How does one know which notation of time complexity analysis to use?

48
Minimum spanning tree vs Shortest path
4
Is there a flaw in this Wikipedia proof of cycle property of Minimum Spanning Tree?
2
Bottleneck TSP with MST
4
Showing that all vertex degrees in MSTs of Euclidian graphs are in O(1)
0
Spanning tree display conventions
2
Understanding the Diameter Constrained MST Problem
2
Efficient Algorithm to compute radius of tree
2
NP-hardness of existence of spanning tree with given maximal degree
0
Proving equivalent definitions for MSTs