I'm reading the book Parsing Techniques by Dick Grune et al. and in section 3.1.3 "Linearization of the Parse Tree" they introduce the notion of linearization:

[...] a parser can produce a list of rule numbers instead, which means that it linearizes the parse tree. There are three main ways to linearize a tree, prefix, postfix and infix.

Those are explained using the following grammar:

and this particular production tree (the grammar is spuriously ambiguous): 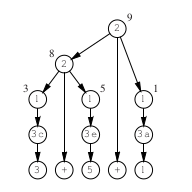 (The numbers at the nodes are semantic attributes.)

In prefix notation, each node is listed by listing its number followed by prefix listings of the subnodes in left-to-right order; this gives us the leftmost derivation [...]:

In postfix notation, each node is listed by listing in postfix notation all the subnodes in left-to-right order, followed by the number of the rule in the node itself; this gives us the rightmost derivation [...]:

Before the linearizations, there is a "leftmost" and "rightmost," respectively. Does that mean prefix notation only works with top-down and postfix notation with bottom-up parsing? But then why? If we start from the rightmost non-terminal and build the parsing tree from the top down, wouldn't the linearization with the "leftmost" in front be the result? Aren't the notations semantically independent?

formal-grammars parsers
Share
Improve this question
edited May 23 '17 at 12:37

"Linearizing" here is equivalent to superimposing a total ordering on what is a partial order. If your grammar is context-free, this partial order can always be conveniently represented by a tree. Other types of grammars will be able to produce derivations orders that are not tree-like, and that is why we generally avoid them.

This total order is meant to allow for sequential algorithms to be written, because the input will be read sequentially. That's all, no magic here.

What happens is that different criteria for linearization will serve different algorithms: if you are going to reduce the input, you will go "from the bottom up", metaphorically, so the linear order that suits you (if you are reading the input left-to-right - because your language has an indo-european flavor), is postfix. If not, prefix.

Not the answer you're looking for? Browse other questions tagged formal-grammars parsers or ask your own question.

3
Proving that every derivation-tree has at most one leftmost-derivation in a context free grammar
5
Streaming parsing algorithms
6
any hope for a universal automatic parser?
3
Where does LL parser belong in the top-down parsers classification
0
How to build a parser for syntactic analysis of regular expressions?
0
How to determine valid handle for given bottom up parser?
1
When and how to generate parse tree while top down parsing
1
Is grammar that describes an equation in prefix (Polish) notation always unambiguous?