What are the uses of Markov Chains in CS? [closed]

We all know that Markov Chains can be used for generating real-looking text (or real-sounding music). I've also heard that Markov Chains has some applications in the image processing, is that true? What are some other uses of MCs in CS?

probability-theory markov-chains
Share
Improve this question
edited May 16 '12 at 23:21

An important application are Hidden Markov Models which essentially assume the underlying random distribution follows a Markov chain. One exiting application of HMMs is gene prediction in bioinformatics. The task is to consume a long (as in millions of symbols) DNA sequence and predict where important parts (genes) are located. One approach is using a Hidden Markov Model that is trained to model a certain distribution.

A related, but more concise problem is detecting when an unfair die is used in a casino. Assume that the game master switches between fair and unfair dice with a certain probability $p$ after every roll. This can be modelled like this: 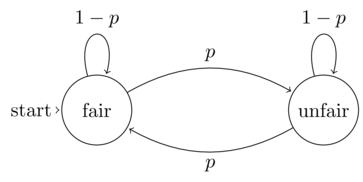 States fair and unfair have emission probabilities for die rolls; in state fair, every number between $1$ and $6$ is emitted with probability $\frac{1}{6}$, in state unfair something different happens. All these probabilities can be trained , either using observed relative counts if we have access to some roll histories (and when which die was used) or using for instance forward-backward algorithm if we have not.

Markov chains appear everywhere. Why? Because the model is so general: You are interested in a large set of objects, and you can handle local manipulations on these objects, eg. modifying an object slightly to get a new one. You want to study global properties of this set of objects, such as its approximate size. This very natural problem, which is an abstraction of problems in many fields, can be modeled by a random walk on a graph, the nodes of which are the objects of interest. Starting from an arbitrary node, an elementary step is to move to a neighboring node with a certain (say uniform over all neighbors) probability. This very simple elementary step applied many times, results in a wonderful phenomenon- the distribution over the nodes converges to a limiting distribution depending only on the structure of the graph, and not on the arbitrary node we started with. This limiting distribution can tell us a lot about the global properties of the set of objects of interest, such as the size or structure of the graph. The time it takes for convergence, or the "mixing time" is thus of crucial importance for algorithmic and modeling applications. One of the more active fields in probability and theoretical computer science is the analysis of Markov chains for various applications. Many clever and beautiful mathematical tools have been developed to analyze the mixing time in the various cases.

In a nutshell, Markov chains are used to model correlated stochastic processes; a broad class of signals. If the value of the signal at any moment can be well approximated by a function of the signal values at a limited number of the the preceding moments, then a Markov model is appropriate.

Not the answer you're looking for? Browse other questions tagged probability-theory markov-chains or ask your own question.

3
Is it viable to use an HMM to evaluate how well a catalogue is used?

1
How are Bayesian Nets, Hidden Markov Chains, Conditional Random Fields and Neural Nets related?
9
What are Markov chains?
6
Clarification of the definition of a POMDP
3
The throughput of the ALOHA protocol if the Binomial distribution was used
1
Higher order empirical entropy is not the entropy of the empirical distribution?
2
Viterbi Algorithm: initial state with ONE probability
5
Understanding simulated annealing information theoretically
0
How do I calculate the probability of a PCFG rule in a parser?