Convex-hull of a star shaped polygon in O(n)

I'm trying to develop an algorithm to find a convex hull of a star shaped polygon in $O(n)$ time. The specific problem, which is also described here, is as follows:

A polygon $P$ is star-shaped if there exists a point $p$ in the interior of $P$ that is in the shadow of every point on the boundary of $P$. The set of all such points $p$ is called the kernel of $P$.

Given an $n$-vertex, star-shaped polygon $P$ specified by its vertices in counterclockwise order, how to compute convex hull of this polygon in linear time.

According to these slides (slide $64$), it's really possible to find such a convex hull in linear time using Graham's Scan. This result is given as a corollary. This means that we probably need only the "scan" part of the Graham's Scan algorithm to solve this problem.

Imagine we have the following star-shaped polygon $P$: 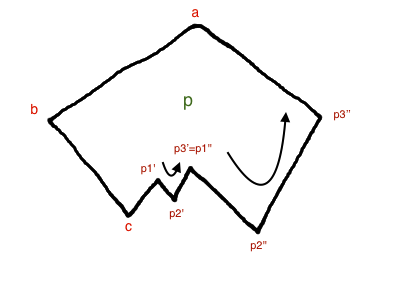 The (literally) Graham's scan seemed to work in this instance, but I would not know for sure if it would work in general.

I tried to think about other ideas to solve this problem, since I was not sure this Graham's scan is correct, but it was mostly because I was not considering as initial point the one with the lowest $y$ coordinate.

If Graham's scan is enough to solve this problem, then the order given of the vertices, as specified in the problem above, must be related to one of the necessary orderings of the vertices required in a usual Graham's scan. I'm talking about sorting the points by polar angle in counter-clockwise around the initial chosen point $p_0$ or about sorting the points according to their $x$ value.

I would appreciate an explanation of the corollary in the slide I'm mentioning above, provided it's really a corollary.

In general for any polygon $P$ this might not work, but for a star shaped polygon, you could observe that from the point $p$ visible to all points, in counter-clockwise order, will be have the aforementioned property.

2
Validating a sequence of points as a convex hull
0
Understanding a few intricacies related to two naive algorithms to compute the convex hull of a set of points
4
Why are the two farthest points vertices of the Convex Hull?
2
Merging of two convex polygon chains in O(log n)
2
The use of binary search when determining whether a point lies inside a given convex hull
2
Minimum distance between two convex hulls maximized
1
Computing convex hull by triangle point inclusion